We know who kidnapped Vittorio Arrigoni, because they announced it:

Vittorio Arrigoni, who had lived in Gaza for three years, was seized by an armed gang after leaving a gym on Thursday evening.

The captors made a video of Mr Arrigoni and demanded the release of two of its leader from a Hamas prison. However his body was found on Friday morning.

The previously unknown Salafist group behind the hanging – The Brigade of the Gallant Companion of the Prophet Mohammed bin Muslima – was yesterday described as a front for Tawheed and Jihad, a fundamentalist organisation that has been active in Gaza, Jordan and Iraq since 2004.

…
A Tawheed statement said it was at war with Hamas over repression of its activities since the arrest last month of Hisham al-Saedini, its Jordanian Palestinian leader.

It said: “We and others have for a long time warned the Hamas government against the risks of acting so close to injustice against the Salafist trend at the request of the international community. Hamas was so arrogant they refused to even listen.”

Thereafter, somewhat incredibly, they semi- denied having abducted him, in a surreal “no but yeah but” response:

In a statement, At-Tawheed wa Al-Jihad said it was not involved in the abduction.

“But we affirm that what happened is a natural outcome of the policy of the government carried out against the Salafi,” the group added

Hamas also issued a statement, which vaguely pointed the finger of blame at, well, guess where…

The motives behind this outrageous crime demonstrate and indicate that some hands and minds are still plotting against the Palestinian people in Gaza, and want to undermine the security and steadfastness of the Palestinians and their supporters; and, to spread a state of terror and intimidation among the worldwide solidarity movement with the Gaza Strip.

The Apartheid Zionist Entity is looking at ways to hinder and prevent the upcoming freedom flotilla from reaching the Gaza Strip, particularly after the great momentum gained from the solidarity activists such as Mr. Arrigoni aiming to loosen and end the unjust and criminal siege imposed on Gaza.

This was echoed on the lunatic Mondoweiss blog:

The timing, which comes days before Flotilla II, and the irreparable damage the crime did to Gaza and the Palestinians tell of the Israeli Mossad hand lurking behind the doers. For Israel, the best way to prevent a second encounter with a freedom fleet is to scare the participants way. Imagine how many people will either in fear or in protest stop joining the flotilla.

And now, for the demonstrations in the Gaza Strip: 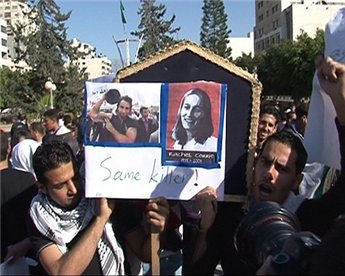 That’s how it is done, chaps!