Ken ‘Sad Clown’ O’Keefe, who sailed with the Mavi Marmara, has videoed himself (you can see his arm holding up the camera) mourning the death of his ‘brother’ Vittorio Arrigoni, the International Solidarity Movement activist who was first kidnapped then brutally murdered by a Salafist terrorist gang in Gaza.

‘More likely you’re not Palestinians, you’re agents. Collaborators. You’re one of the few that did not get taken care of when Hamas, for all of its uhhhhhh…. problems. Hamas has done a good job at getting rid of the collaborators out of here [sic], and there must be a few if they’re doing this to Vik. Nobody stands to gain more than Israel. So I would say to everyone out there: before you claim that any friction [sic], any little fraction [sic] group of Palestine…. no, no, no, no, no. Even if Israel has nothing to do with it, which I think they most certainly do –they’ve got the freedom flotilla, which they are scared the crap of knowing full well that if they do what they did with the Mavi Marmara, they’re over, it’s done. The whole world will be watching this time and they will not get away with it……. It would not be out of the realm of possibility, in fact it’s completely possible, that they would have their collaborators here in Gaza do this and take Vik. And if they are agents of Israel, then they will kill him. And if they’re Palestinians, they will let him go. Never has Palestinians kidnapped and killed foreigners. It happens in many parts of the world. Many, many parts. Columbia, Iraq, it happens in many parts of the world but it has not happened here. And if it happens here, it is not via Palestinians.’

Here is the video:

O’Keefe, a former US Marine who renounced his American citizenship, was the originator of the ‘human shield’ idea for the Iraq War stoppers, where the only one to benefit from that humanitarian campaign tactic was Saddam Hussein. Interestingly, he doesn’t seem to think that human shields were used by Hamas — for all its, uhhhhh…. problems — in its 2009 war against Israel. But then, as this extended monologue makes plain, he is a man whose grey matter long ago turned to smoothie.

Yet until now, O’Keefe was simply the weepy-hysterical harlequin of Hamas apologetics and upset open letters to Panorama’s Jane Corbin. This is the first instance of him actually endorsing Hamas’ murder of oppositionists.

As Human Rights Watch documented, the Islamist party likes to execute anyone it suspects of ‘collaboration’ with Israel:

At least 32 people were killed and dozens of others maimed by the security forces in Gaza since the beginning of the war, Human Rights Watch says, based on interviews with victims and witnesses and reports by Palestinian human rights groups.

According to the report, 18 suspected collaborators were executed during the war, between 27 December, 2008, and 18 January, 2009. Another 14 were killed since the declaration of a ceasefire.

Among the incidents of killing were convicted collaborators already sentenced to death, and Fatah members held on various charges, and others, who escaped from the central prison in Gaza City when Israel bombed it on 28 December.

Will the BBC and The Guardian continue to describe Ken O’Keefe as a ‘peace activist’ now that he plumps for the killing of Palestinians?

Ken O’Keefe will be one of the speakers at an Interpal fundraiser in Leicester on 30 April, along with Lauren Booth. 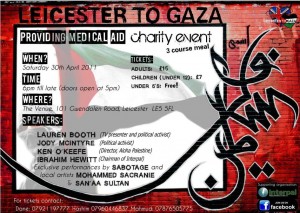