Labour NO to AV today announced the names of 375 Labour Party councillors from across Britain who will be voting no to the Alternative Vote on 5 May.  The campaign launches with a three point leaflet, simple message: “No to a Lib Dem fix. No to Nick Clegg. No to AV”.

John Prescott is on the back telling voters why he is saying no: “You will know that I am a lifelong Labour Party voter. What you might not know is that I am going to be voting ‘No’ at the referendum. I want to ensure a majority Labour government can be returned by the British voters, without the need for a back room deal with Nick Clegg. AV makes elections unfair, will lead to more coalitions and leave the Lib Dems as perpetual Kingmakers.” 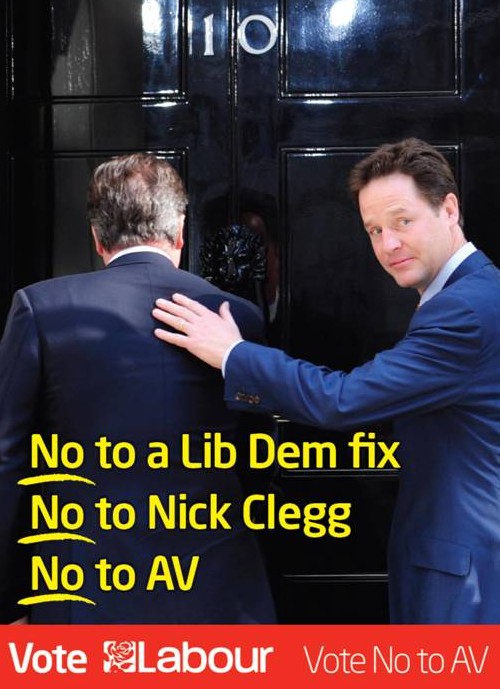 What kind of king makers Clegg will be making after the AV election is unclear. Things are going from bad to worse for him and his party. No surprise really he’s a walking PR disaster that even Malcolm Tucker might struggle to save.

The Newstatesman blog highlights today the problem the Liberal Democrats are having finding candidates for the local election. It quotes the Financial Times saying that the party could field candidates in as few as 58% of seats compared to 64% four years ago. The party says it is concentrating only on seats where it can win, but evidence suggests otherwise. In Warrington the party has run the council in a coalition for five years, but is not fielding candidates in two wards.

The lack of candidates comes as the party continues to languish in the polls. The latest YouGov/Sun poll put Labour on 42%, the Tories on 36% and the Lib Dems on 10%. An earlier poll put them on just 9% and the Tories on 37%.