In response to Peter King’s hearings on radicalisation in US Muslim communities, many US Muslim groups have pointed out that 30% of Islamist terrorist plots in the US were prevented as the result of tip-offs by American Muslims.

Cageprisoners, the pro-jihadist advocacy group, is disgusted. In an article on their website their researcher Ayesha Kazmi writes:

While such statistics remain ambiguous, what appears most problematic is the lack of a deeper line of questioning going on. While these seemingly arbitrary statistics are indeed troubling … what is more alarming is the permissiveness with which American Muslims treat the whistle-blowing taking place within their communities and inside their mosques.

The facts are true. American Muslims accused and imprisoned because of their alleged involvement in planning terrorist plots, such as Tarek Mehanna, were tipped off by members in their own community. This is hardly a phenomenon to be applauded and encouraged, particularly in light of the fact that the American media is now increasingly criticised for promoting and spreading misinformation to an American public that has, in turn, become increasingly misinformed.

American Muslims have much to pride themselves on, such as their strong national identity and their overall economic successes – largely benefiting from the ‘American dream’ – and they need to remember that. It is most ironic that their strong national identity has come at the expense of their civil liberties. This 30% statistic should be the furthest item laying at the centre of American Muslim pride.

Last year Stephen Pittam, the secretary of the Joseph Rowntree Trust, the Quaker charity that is Cageprisoners’ main financial backer, defended his decision to fund the group:

“I’ve recently spoken to Cageprisoners and I have had a commitment that they are completely opposed to any form of the use of terrorism aimed at civilians.”

The only possible reading of this latest Cageprisoners article is that its author does not think American Muslims should be reporting Muslims to the police for acts of suspected terrorism.

If this is not supportive of terrorism, then what is?

This latest article demonstrates – for the umpteenth time – that Cageprisoners is at best ambivalent about  jihadist terrorist violence and at worse openly supportive of it.

The Joseph Rowntree Trust’s continued funding of Cageprisoners is a stunning betrayal of the Trust’s founding principles and a slight on the memory of its namesake Joseph Rowntree, a committed pacifist.

If Stephen Pittam had an ounce of self-respect he would halt all funding of Cageprisoners immediately and publicly apologise  for empowering and defending this vile and twisted group.

habibi adds: tonight Moazzam Begg will be a guest of the Khomeinists and terrorist supporters of the self-styled Islamic Human Rights Commision (IHRC). 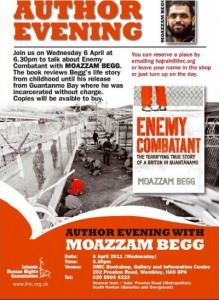 The Rowntree Trust has also funded the IHRC, providing £60,000 for “core costs for implementing a communication strategy”.

What about Amnesty UK? They’re still on board too:

Throughout 2011, Andy Worthington, investigative journalist, senior researcher for Cageprisoners and author of The Guantánamo Files, will be touring the UK, showing the documentary “Outside the Law: Stories from Guantánamo” (which he co-directed with filmmaker Polly Nash) and attending post-screening Q&A sessions. On some dates, Andy will be joined by former Guantánamo prisoner Omar Deghayes, who is now the legal director of the Guantánamo Justice Centre, Polly Nash, and other guests yet to be confirmed. Amnesty International UK is providing publicity and some support for the tour.

The 2011 UK tour follows a 35-date UK tour undertaken by Andy last year (often in the company of Omar Deghayes), and, for the most part, involves events arranged by Amnesty International student groups, following an initiative launched at the Amnesty International Student Conference at the Human Rights Action Centre in London in November 2010, where Andy was a speaker, and where he invited student groups to hold screenings.