There are groups who support the Palestinian cause and the BDS movement in the name of justice and human rights (along with a whole load of other nice sounding things). Celebrating the 10th anniversary of the start of the Al Aksa Intifada is a pretty extreme thing even among BDSers. Especially since the murder and terrorising of civilians is utterly opposed to the core values of human decency that these groups claim to hold in such high regard.

A case in point is the third of series of 3 events held jointly by Inminds and Sukant Chandan’s group the Sons of Malcolm. Gene wrote about the second of these events at the time. It was held in the Venezuelan embassy for some reason. Regular readers will be familiar with Inminds but just to refresh your memory Lucy Lips wrote a great expose of the man who runs it, Abas Panjwani, someone who simply seems to love turning up at Jewish community events and taking pictures. Sukant Chandan is also no stranger to followers of Harry’s Place and quite frankly is such a twisted nutter that I don’t even know where to begin when talking about him, oh yeah I do, check out his latest antics here. He has also spent the last couple of weeks lavishing praise on Gaddafi as the latest victim of Western imperialism on his blog.

So these are the organisers of the 3 events that started on October the 2nd and finished on the 21st of March and salute the Al Aksa Intifada. The first event was entitled “We will not liberate Palestine, Palestine is liberating us” the second “Outbreak of the Intifada, turning back the empire,” was held on November 6th and the 3rd was billed as a “Symposium saluting the 10th anniversary of the Al-Aqsa Intifada and Palestinian women’s unique role in that ongoing struggle”.

Speakers included such enlightened figures as Ramzy Baroud, Yvonne Ridley, Ewa Jasiewcz and Sukant Chandan.” A grand total of about 40 minutes out of a 2h 30 min meeting was spent talking about terrorists who happen to be female and the rest a general mix of conspiracy theory nonsense and hate towards Israel. You can find the whole thing on youtube here. 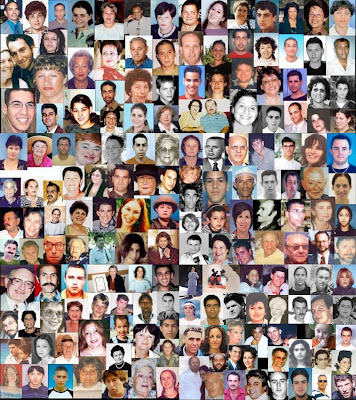 The only achievement of the Al Aksa Intifada