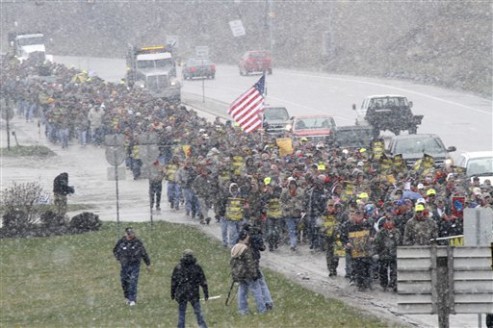 Thousands of union members and supporters marched in the snow in Waynesburg, Pennsylvania— not previously known as a hotbed of leftwing or revolutionary politics– to mobilize against the recent Republican assaults on organized labor.

In related news, Politico reports that cops and firefighters– who tend to vote Republican– are turning against the GOP because of the assault on public employee rights in Wisconsin, Ohio and other states.

Wisconsin Gov. Scott Walker and others took aim at the GOP’s most powerful labor antagonists but ended up hitting some of the party’s best friends too — leaving public-safety unions fearful this year’s attack on teachers might easily be next year’s attack on them.

It’s a political shift that could have significant repercussions, and not just because these right-leaning union members vote for Republicans in sizable numbers. Angry cops and firefighters make for bad PR — especially after Republicans under President George W. Bush aligned themselves so successfully with the heroes of Sept. 11 in the years since then.

Chuck Canterbury, the national president of the Fraternal Order of Police, said his members are “shocked” by the turn of events.

“Who are these evil teachers who teach your children, these evil policemen who protect them, these evil firemen who pull them from burning buildings? When did we all become evil?” said Canterbury, whose union endorsed Bush in 2000 and 2004 and John McCain in 2008.

Walker’s effort to buy off cops and firefighters by exempting them from his bill slashing collective bargaining rights for government workers appears not to have had the desired effect.

More Americans back public-employee unions than governors seeking to balance strained budgets by demanding givebacks, including a curb on bargaining rights, according to a Gallup poll released Friday.

The poll, which showed that 48 percent agree with public-employee unions compared with 39 percent who back the governors, marks a leveling of the political playing field on an issue that the GOP has pushed, most noticeably in the Midwest. 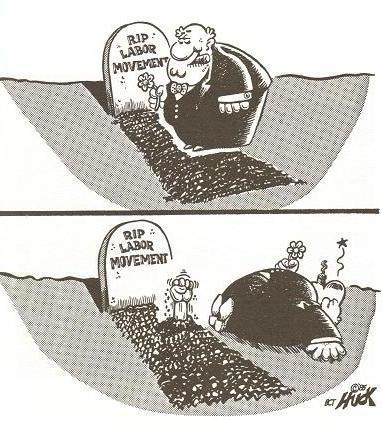