Ad magazine Campaign has just published the results of a poll into the greatest poster ads to appear in the UK. There are only two political ads in there. No surprises which of those came top.

It’s the Saatchi & Saatchi created ad from the 1970s ‘Labour isn’t working’.  The only other ad to make the Hall of Fame voted by around 10,000 people is an ad from 2001 for the Tories in Scotland targeting Labour and its 1997 promise on tuition fees.

No place for some of the other memorable ads that spring to mind. The 2010 election provided some great candidates for nomination. I’m thinking of the air brush David Cameron series of ads. Surely, worthy of a place? 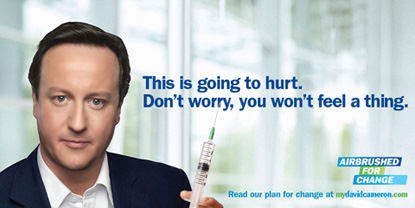 Other campaigns not on the Campaign list that spring to mind are ones like the Tory ‘New Labour. New Taxes’. Obviously not a personal fan, but memorable none the less.

Then, of course, there is the despicable Tory campaign attacking Tony Blair portraying him with ‘Demon Eyes’.  That’s not there either. I’m unduly sad about this, but would have maybe expected it considering the huge row it caused at the time. Maybe it isn’t political ads that stick in the wider public consciousness.

The list, which is predictably topped by Wonder Bra’s ‘Hello boys’ ad, includes Apple’s iconic silhouette ad for its iPod, ‘Dig for Victory’ from the Second World War and Lord Kitchener’s recruitment poster from the First. There are also quite a few sports ads. Notably the likes of  “’66 was a great year for English football. Eric was born” and the “St Wayne” ad that featured Wayne Rooney bloodied with his arms out stretched.