Nick Clegg appeared to reveal concerns about the closeness of his relationship with David Cameron in an aside picked up by microphones that Gordon Brown would be proud of.

As the two promoted Budget plans for economic growth in Nottingham, Clegg quipped: “If we keep doing this we won’t find anything to bloody disagree on in the bloody TV debate”. No kidding. 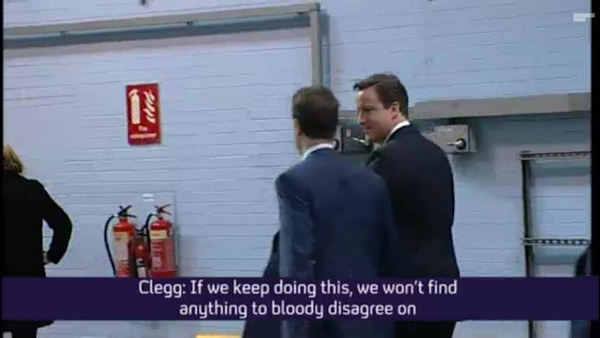 What has become increasingly clear is that the Liberal Dem leader doesn’t like to disagree with Cameron. The Lib Dems we agree with Nick slogan has morphed seamlessly into “we agree with Dave”.

That can only become a serious electoral concern for Clegg and his Lib Dems. Oh wait has that process has already started? Let’s not forget  the toxic Clegg suffering humiliation in Barnsley. The Lib Dems slipped into sixth place. Whether that was a blip or not we’ll find out soon enough as the next by-election is already on the way in the shape of Leicester South.

Alec Macph adds: For anyone who may have been watching Channel4 News with the sound off and is now confused, I would like to make clear that Chris Huhne is not being sought for involvement with the murder of WPc Yvonne Fletcher.