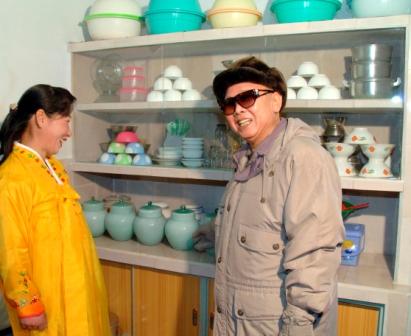 Rather disconcertingly, as I started to enter “north korean food economy” to a popular Internet search-engine to find accompanying pictures for this piece, the intelligent search suggested “north korean food recipes”. I only can conclude that other users, as I did, followed in morbid fascination to see what was available beyond the simple potatoes and boiled onions which Alejandro Cao de Benos de Les y Pérez y Cacacacacacacacaca has fond memories of eating.

(Reports of cannibalism are common, such as in Long Road Home: Testimony of a North Korean Camp Survivor by Kim Yong who is one of two documented escapees from Camp 14.)

Although the continued fall across the Middle East and North Africa of previously reliable purchasers of military hardware will not be helping, Pyongyang has been looking for additional food supplies for some time. In February, the Guardian reported that all 40 foreign embassies were actively seeking food aid. Countries such as Zimbabwe also have been approached.

Now the Daily NK is reporting that market-traders in North Korea who ‘offer’ (I rather suspect there is an element of coercion) one ton of rice are being rewarded with Party membership.

Elsewhere, for those Harry’s Place readers near Alexandria and Fairfax County, Virginia, may I suggest a visit to the Pyongyong Soondae (lit. Pyongyang Sausage)? Run by Ma Young-ae, who defected from North Korea in 2006, one dish is roast chicken intestines (in Korean, “ddak ddong jib”; lit. “chicken shit-house”).

Such a source of protein would beyond the wildest dreams of most of her compatriots’ back home.

Update: In the comments thread, Garlic (a RoK resident) observes that “soondae” is more accurately translated as the truly scrumptous black pudding.  In addition to this adaptation to American sensibilities, pork and even rabbit would typically be more common in a mountaineous and heavily forested North where everyone was not being starved through sheer malfeasance.