The Labour No AV campaign officially launches today, backed by 200 MPs and peers, urging Labour members and supporters to vote no to the “unpopular, unfair and expensive Alternative Vote”.

More specifically, Labour’s No campaign is driving home the persuasive argument that if the Yes vote wins it will lead to more hung parliaments and that won’t, as the Yes campaign claims, put power in the hands of voters, but rather in the hands of king making politicians. Enter Nick Clegg and the Liberal Democrats stage right.

That is exactly as David Blunkett argues what most people don’t want: “What they don’t want is the kind of back-room deals that you’re more likely to get with AV. Above all, we expect to have one vote – one voter, and each vote counts equally.”

Earlier this week Polly Toynbee argued that Clegg was a minor distraction, would soon be gone, and that giving him a kicking wasn’t reason enough to vote against AV.

“But for those tempted to vote no out of a low urge to give Clegg a kicking, consider this: Clegg is a minor distraction who will soon be gone. If you want to be tribal, keep the real enemy in your sights.”

Well it is one of the reasons Polly. Maybe Clegg will be gone soon enough and maybe he won’t, but having looked at the rest of the leading Lib Dems I don’t see a lot of difference in Douglas Alexander, David Laws, Chris Huhne, and Vince Cable.

Even those who apparently sit on the left of the party like Simon Hughes don’t offer much hope. Hughes, the party’s deputy leader, could only bring himself to abstain against tuition fees before accepting the job of “access tsar” on higher education. Nice work. 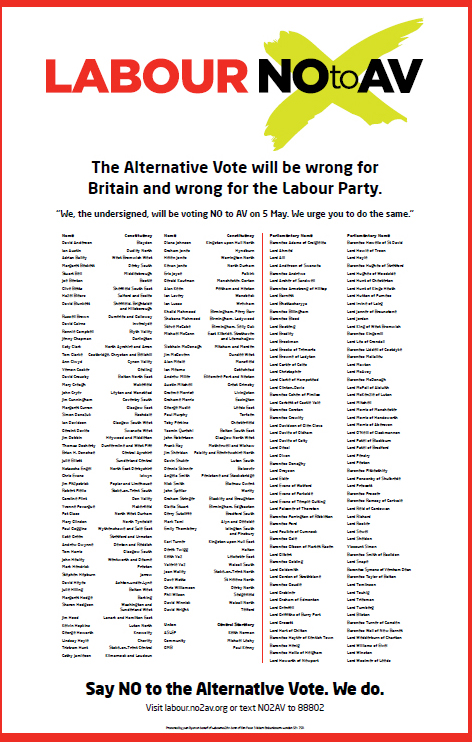 So what is a vote for AV? It is a vote for giving power to a small bunch of right leaning Lib Dems. What it is not is as John Healey Shadow Health Secretary, says is a “new dawn for democracy”.

We should remember as Tony Lloyd, chair of the Parliamentary Labour Party, reminds us that it was Clegg who demanded the AV vote and for a very good reason:

“Nick Clegg demanded this AV referendum as a fix to keep his party in Government. The only party to benefit from AV would be the Lib Dems. I believe that voters should keep the right to evict one Government and choose another. We shouldn’t be handing that power to Nick Clegg and the Liberal Democrats.”