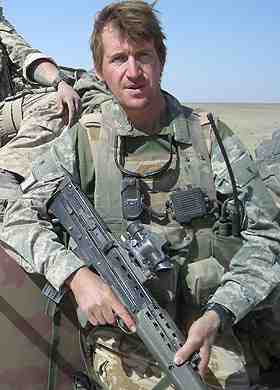 In discussing the 15 years of military background of the new Labour MP for Barnsley Central – including front line service with the Paratroop Regiment in Sierra Leone, Iraq and Afghanistan; where he commanded a unit of 100 Special Forces – a BBC reporter said he was well-equipped to bring the fight to Westminster.

I rather think it will be a different form of fighting. What he will bring is an understanding of the soldier’s concerns to a Parliamentary Labour Party which, as Joseph K estimates in the comments, has less non-political experience amongst at least five of its Shadow Cabinet members than Jarvis’ military record alone.

Off the top of my head, I cannot think of any other sitting Labour MP with military experience. No doubt an HP reader will correct me if this is inaccurate. Although the Tories have noted former soldiers – such as Iain Duncan-Smith (six years in the Scots Guards, including Northern Ireland) and Patrick Mercer (25 years with the Worcestershire and Sherwood Foresters rising to Colonel, including the First Iraq War and being mentioned in dispatches from Northern Ireland) – their MPs almost exclusively are not.

It is a sorry state of affairs when James Blunt has more military experience than hundreds of MPs combined.