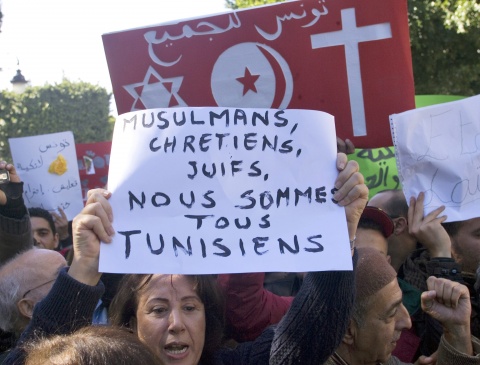 As the repressive regimes are toppled in Tunisia, Egypt and (let us hope) elsewhere, it becomes vital for democratic, secular and tolerant voices to make themselves heard early, often and loudly.

So this is encouraging:

About 18,000 people clogged the main avenue of Tunis on Saturday, many protesting against Islamists, following more than two weeks of calm in the North African country’s capital.

Tunisia’s former president Zine al-Abidine Ben Ali was ousted in January after a wave of demonstrations, sending shockwaves through the rest of the Arab world.

As many as 15,000 of the demonstrators on Saturday were protesting against Tunisia’s Islamist movement, calling for religious tolerance a day after the Interior Ministry announced a Polish priest had been assassinated by an extremist group and following verbal attacks on Jews.

“We need to live together and be tolerant of each other’s views,” said Ridha Ghozzi, 34, who was among the protesters carrying signs and chanting slogans including “Terrorism is not Tunisian,” “Religion is Personal” and “Muslims, Christians, and Jews – we’re all Tunisians.”