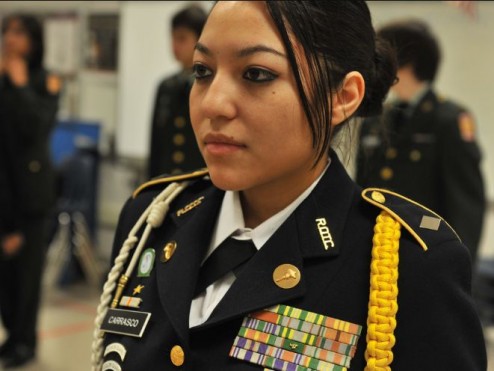 While Europe struggles with integrating immigrants into the larger community, some foreign-born young people in the US are denied the right to integrate in a traditional patriotic way– by serving in the US military.

Noheli Carrasco, a member of her Virginia high school’s Junior Reserve Officers Training Corps, wants to enlist in the Air Force after graduating. But she is barred from joining because she was born in Bolivia and is neither a US citizen nor a permanent resident.

The Obama administration, trying to bolster enlistment rates while fighting two overseas wars, is seeking to lift the restriction on undocumented immigrants like Carrasco through its DREAM Act. The Senate rejected it in December, but administration officials have called for its reintroduction and passage.

“It’s the one thing I want to do. I want to serve this country,” said Carrasco, who came here with her family from Bolivia when she was 11. “I had no idea how hard it would be.”

The DREAM Act is most often described as a way to provide young, undocumented immigrants with a path to citizenship through attending college. But it would also give aspiring soldiers like Carrasco a chance to serve in the military – and earn permanent residency in the process.

Carrasco is one of thousands of undocumented immigrants who would like to serve their country in the armed forces, but currently cannot.

About 65,000 such eligible students graduate from U.S. high schools each year, but upon graduation, these young people, who include honor roll students, star athletes and junior ROTC members, hit a wall.

Instead of advancing to college or the military and later repaying the investment that taxpayers made in their education, they live in fear of being discovered by the Department of Homeland Security and deported to their “home” country, even if it is a country they cannot remember and where they have no friends, family or support.

For all their professed support of the military and those who serve in it, the overwhelming majority of Republicans in Congress opposed the DREAM Act. And Senate Republicans blocked it from coming to a vote last year.