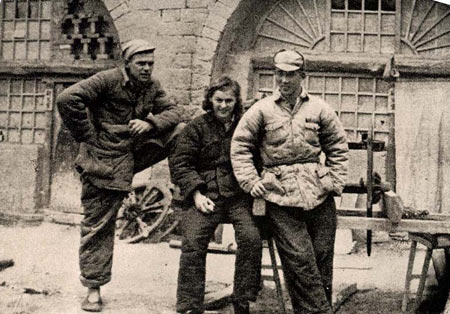 Although not nearly as bad as Bonekickers, the BBC’s recent sci-fi extravaganza, Outcasts was pretty dire.

I did not so much object to the perfectly ironed clothes and combed hair, light years from Earth, as I did to one scripted – well, it had to be – discussion about gender relations between pretty-but-tough female cop and her hunky male partner.

Women, pretty-but-tough cop declared, had not designed or built nuclear weapons. Apart from, I assume, Joan Hilton and her female colleagues on the Manhattan Project.

Hinton, who died aged 88 in June 2010, was studying for a PhD in physics at Wisconsin University when recruited by the US Government in February 1944. Having been assigned to the area of research into enriching uranium and plutonium, she evaded military checkpoints to witness the first atomic explosion at Alamogordo in July 1945.

Having previously convinced herself that the A-bomb was first to be used on an un-populated island as a gesture of strength, she tasted the sin that arrived in the physics community after the bombings of Hiroshima and Nagasaki.

Her response was to lobby for “peace”, including sending the mayors of major US cities a sample of glassified sand and asking if they wished the same fate for their cities.  As the Cold War loomed, she moved to China in the run-up to the Maoist take-over and married Erwin Engst, a agricultural scientist working with dairy herds (seen with her in the accompanying photograph).

Although there was no suggestion that she passed nuclear knowledge to the Chinese weapons programme, and participated in projects more deadly than perfecting cow milking procedures, she and Engst remained loyal Maoists.  In 2008, she told The Weekend Australian,  “It would have been terrific if Mao had lived.  Of course I was 100 percent behind everything that happened in the Cultural Revolution — it was a terrific experience.”

So, can HPers think of other members of the distaff side who have participated in weapons programmes?