“I would tell Iranians to learn from the Egyptians, as we have learned from you guys, that at the end of the day with the power of people, we can do  whatever we want to do.  If we unite our goals, if we believe, then all our dreams can come true,”

This will, of course, not be reported by PressTV or the rest of the Iranian State media. But you can be sure that ordinary Iranians will hear it.

Meanwhile, here’s Sandmonkey on how Egyptians can keep control of their revolution:

This lack of action and organization will be used against us (the protesters) in every way possible. The participants will start complaining about the lack of direction or movement leaders. The government will start complaining that the protesters haven’t offered a single person to represent them and negotiate with the government for them, and that the protesters don’t know what they want. Mind you, this is utter rubbish: It’s not that the protesters don’t know what they want (you can read about their demands everywhere), it’s that their demands are so nonnegotiable for them, that it makes no sense for them to engage in negotiations until a number of those demands get realized. Thus, Gridlock!

So here are my two cents: next time when you head to Tahrir, alongside blankets and food and medicine, please get some foldable tables, chairs, papers, pens, a laptop and a USB connection. Set up a bunch of tables and start registering the protesters. Get their names, ages, addresses & districts. Based on location, start organizing them into committees, and then have those committees elect leaders or representatives. Do the same in Alex, In Mansoura, in Suez, in every major Egyptian city in which the Protesters braved police suppression and came out in the thousands. Protect the Data with your life. Get encryption programs to ensure the security of the data. Use web-based tools like Google documents to input the data in, thus ensuring that even if your laptops get confiscated by State Security Goons, they won’t find anything on your harddrives. Have people outside of Egypt back-up your data daily on secure servers. Then, start building the structure.

You see, with such Proper citizen organization and segmentation, we’ll have the contact information and location of all the protesters that showed up, and that could be transformed into voting blocks in parliamentary districts: i.e. a foundation for an Egyptian Unity party. That Egyptian Unity Party will be an Umbrella party that promotes equality, democracy & accountability, without any ideological slants. It should be centrist, because we don’t want any boring Left vs. Right squabbling at that stage. Once you institute the structure, start educating the members on their rights and their obligations as citizens. Convince them to bring their friends and relatives into meeting. Establish voters’ critical mass , all under that party.

The Egyptian Unity Party, however, will not be a permanent structure, but rather a transitional entity with a clear and direct purpose: create the grassroots organization to take back the parliament and presidency in the next elections. Once sufficient votes and seats have been obtained, the party will amend the constitution to promote civil liberties, plurality, and truly democratic elections. Once that constitution is in place, the party can disband, and its elected members can start forming their own parties and collations, based on their personal beliefs and ideologies, or they can join any of the existing parties, and breathe some life into their decaying carcasses. We will end up with an actual political process and representative political parties that will actually discuss policy and have to represent those who voted for them so that they can get re-elected. Democracy in action. An old but brilliant concept. A way to ensure that no matter what, we will have a huge influence on who becomes the next Egyptian President come election day in September.

I am extremely hopeful we can do this. So far we have proved all the critics and the haters wrong. It’s time to do that again!

I attended a number of Iranian democracy protests over the last couple of years. One of the notable things about them was that we were pretty much the only non-Iranians there. There was zero solidarity from anybody else at most of those demonstrations.

Now there is an opportunity for people in this country to give practical help to the people of Egypt who are desperately trying to build their own democracy, and to prevent it being subverted and crushed by anti-democratic forces.

Who is organising that practical effort, and what is being done?

Attend the solidarity demonstration this Saturday, in Trafalgar Square. 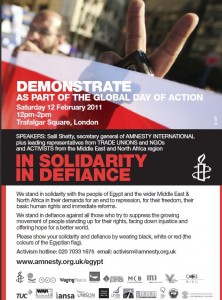