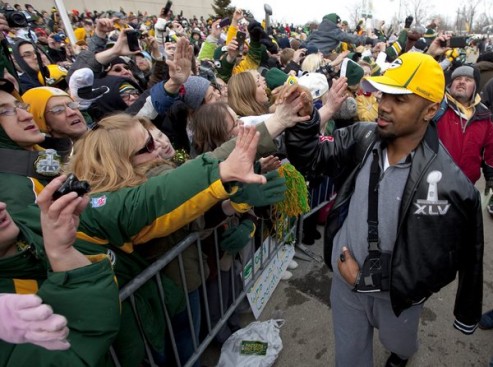 I had forgotten this, but in the wake of the Green Bay Packers’ 31-25 victory over the Pittsburgh Steelers in Super Bowl XLV, it’s worthy of note:

The Packers are owned by the fans, making them the only publicly owned, not-for-profit, major professional team in the United States…

In 1923, the Packers were just another hardscrabble team on the brink of bankruptcy. Rather than fold they decided to sell shares to the community, with fans each throwing down a couple of dollars to keep the team afloat. That humble frozen seed has since blossomed into a situation wherein more than a hundred thousand stockholders own more than four million shares of a perennial playoff contender. Those holding Packers stock are limited to no more than two hundred thousand shares, keeping any individual from gaining control over the club.
…..
The Packers’ unique setup has created a relationship between team and community unlike any in the [National Football League]. Wisconsin fans get to enjoy the team with the confidence that their owner won’t threaten to move to Los Angeles unless the team gets a new mega-dome.

What I didn’t know was that other NFL owners were so nervous about this non-profit, community-owned stuff catching on that in 1960 they approved an amendment to the League’s bylaws which states that “charitable organizations and/or corporations not organized for profit and not now a member of the league may not hold membership in the National Football League.”