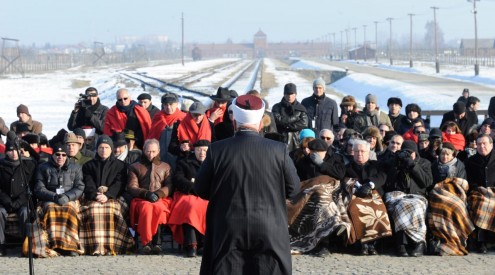 It won’t put an end to Islamist-fueled hatred of Jews and Israel, and I’m sure some will find reasons to be cynical and dismissive about it, but surely this is of some positive significance:

In a bid to fight anti-Semitism and bridge cultural rifts, a large delegation of Muslim dignitaries visited Auschwitz on Tuesday to pay tribute to the millions of Jews and others who were systematically killed in the Holocaust.

The group of some 150 people included representatives from Morocco, Jordan, Turkey and Iraq, as well as rabbis, Holocaust survivors and Christian representatives. Several European dignitaries also were part of the group, including the former German Chancellor Gerhard Schroeder.

“Muslims have to stand up with Jewish friends because in Europe, anti-Semitism is rising — and where there is anti-Semitism, Islamophobia is not far away,” said British Mufti Abduljalil Sajid.

Sajid said he knew of the Holocaust from books and movies but that it was his first visit to Auschwitz. “I wanted to see it with my own eyes — and teach others about the evil of hate,” he said. “This should never happen again, to anybody.”

Israel Meir Lau, a former chief rabbi of Israel and himself a Holocaust survivor, said he was happy that such a large number of Muslim leaders were seeking to deepen their understanding of the Holocaust.

The vice president of the American Gathering of Holocaust Survivors and their Descendants, Elan Steinberg, called the visit “unprecedented.”

“Holocaust survivors welcome this extraordinary visit as a major blow against the scourge of Holocaust denial and as an act of encouragement to the strengthening of interfaith relations,” Steinberg said. “This delegation will spread the message of mutual tolerance and understanding as the antidote to hate and disrespect. It is a welcome benefit to both Muslim and Jew.”

The trip was organized by UNESCO, the educational and cultural arm of the United Nations, as well as Paris City Hall and a new anti-racism group called the Aladdin Project. It comes at a time when some in the West voice unease over Islam’s growing clout in the underbelly of their communities and with Holocaust denials by political leaders such as Iranian President Mahmoud Ahmadinejad.

The Grand Mufti of Bosnia Mustafa Ceric is a member of the European Council for Fatwa and Research, a Muslim Brotherhood organisation which is presided over by Yusuf Al Qaradawi.

You will remember that Qaradawi regards the Holocaust as God’s punishment, and hopes that he will be allowed to participate in the next similar “punishment”.

Here is an extract from a Wall Street Journal article on the European Council for Fatwa and Research, from 2005:

At one meeting attended by a Wall Street Journal reporter, a council member cited “The Protocols of the Elders of Zion,” a notorious anti-Semitic forgery written in czarist Russia, in a position paper on how Muslim families are under threat in Europe. The Protocols, the speaker said, was evidence of a Jewish plot to undermine Muslim moral values through sexual permissiveness.

Why am I telling you all this?

Because Ceric is rumoured to be in line to succeed Qaradawi as ‘leader of European Islam’. This Global Muslim Brotherhood report also records that Ceric’s “Assistant”, Senaid Koblica, who is the President of the Islamic Council of Norway as well as as the Imam of the Islamic Community of Bosnia was the only Muslim Brotherhood connected person to speak out against Qaradawi’s “Holocaust” sermon:

“If it’s such that Yusuf Al Qardawi honors the Holocaust, I think it’s unacceptable from somebody who is an important religious reference for many Muslims. The Islamic Council of Norway will take up this issue with other scholars who sit in the European Council for Fatwa and Research,” says the head of the Islamic Council of Norway (IRN) Senaid Kobilica. IRN commented on the issue in a press release on its homepage. “We let nobody dictate how we Muslims should leave here in Europe. The statement hurts and provokes me,” says Kobilica to Dagbladet.no about the statements from the leader of the European Fatwa Council. Kobilica conveyed a protest and hopes it gives results.”I contacted a member of the council, Bosnia’s chief Mufti, who will take up the issue in the next meeting of the council. I hope he’ll report that this is a completely unacceptable statement,” says Kobilica.