While slashing food and fuel subsidies for its economically-stressed population, the Islamic Republic of Iran has found the cash to pay for ads in the London Underground promoting its Press TV propaganda channel and featuring guess-who playing the role of free-speech defender. 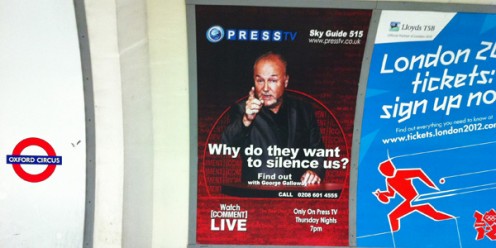 Are there regulations covering what kinds of ads may appear in the Underground? Would they apply to an advertiser responsible for this? If not, how about a sense of basic human decency?

Did you know that a British TV broadcaster (London, England) carries a channel funded by the Iranian theocracy?

The point being that Sky, which transmits Press TV in the UK, is the brand name for British Sky Broadcasting’s digital satellite television and radio service. And British Sky Broadcasting is partially owned by Rupert Murdoch’s News Corp., which also owns Fox News. So what are the chances that Fox News, that scourge of Islamist extremism, would ever report on this particular connection? About as good as the chances of Fox News reporting that News Corp.’s second largest shareholder is Saudi Prince Al-Waleed bin Talal.