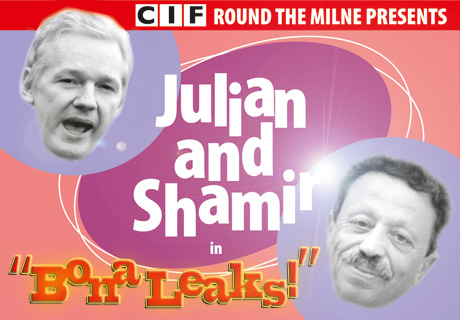 In 2005, the Belarussian Ministry of Foreign Affairs claimed that a US embassy worker “Joseph Martin” encouraged opposition against Lukashenko, distributing pamphlets produced by the opposition.

According to Israel Shamir and others, this story has a sexy twist.

In the Belarus dossier belonging to WikiLeaks, and in other places, you can read all about a love story with political overtones.

The representative of the controversial Wikileaks creator Julian Assange is Israel Shamir, the only Russian-language journalist associated with the website. He gave documents to the Interfax-West news agency confirming facts which were first published in August 2005 in the Belarusian weekly “Observer” in the article “Leisure in the embassy : a little bit of love and revolution. ”

In an interview with a Belarussian publication, a young woman called Anastasiya gave details about her relationship with a marine official called Joseph Martin.

She told the story of how and where she met with an employee of the American Embassy, how he courted her, how they spent their time at parties arranged by the embassy in the country and the then U.S. Ambassador Michael Koza accompanying the girl at a demonstration. She backed up her words with photos, some of which were published in the “Observer” newspaper.

In one of the cables sent by director of the US diplomatic mission in Belarus, you can read a summary of the interview and a description of the pictures which were published. These are found in the text provided to Interfax West by Israel Shamir.

Notably, the diplomat said that in an interview with Belarusian publications Anastasia “has accused [US marines] in Minsk and other officials of illegally distributing provocative literature for the Belarusian opposition campaign in 2001.”

The US cable asserts that the girl “described her relationship with Joseph Martin, whom the newspaper calls the head of a US marine office”, however, according to the diplomat, “Martin was a corporal who served in Minsk in 2000-2001 butwas not the commander.”

The document provides information of a consular report containing the real name of the woman featured in “Explorer“, and states that in May 2001, she was denied a visa after receiving information that she “worked as a stripper/prostitute in Moscow.”

Later on, she was granted a visa in June 2001 to work as a lifeguard, and went to visit Martin in California, according to the US cables.

Despite the confirmation of contacts and meetings between US staff and Belarussian citizens, the U.S. diplomat describes the Observer publications as “part of an organized smear campaign against the West. “

I guess this is Israel Shamir’s first sexy Wikileak. So, well done Israel! Maybe now you could publish all this with Bona Books!