For many Jews brought up in the tradition of the Zionist left, who recall the socialist vision of David Ben-Gurion and many other Zionist leaders, and who themselves spent their youth in left-wing Zionist youth movements, the dramatic move to the right that Israel has taken in recent years has been a disappointment.

I never spent time in Habonim supporting the Zionist movement, spent time at university in the United Kingdom arguing against anti-Zionist motions put forward in the student union, spent time in Israel working on a kibbutz, nor spent a year studying at the Hebrew University of Jerusalem because I wished to see someone such as Avigdor Lieberman as Deputy Prime Minister of the country.

I do not need to be told that the lack of developments in peace between Israel and he Palestinians is because Hamas do not want peace. I have read their Covenant and am aware of what they say. But I was not born yesterday: I am also very aware, as I was taught in Habonim and at the Hebrew University of Jerusalem, that the PLO did not historically want peace.  Until 1977, the fact that the PLO did not want peace did not stop Israelis electing left-wing governments. I therefore see no reason why the fact that Hamas do not want peace should mean that Israelis should not currently vote for left-wing parties. Israelis are not responsible for who the Palestinians elect, they are responsible for who they elect themselves and, in my opinion, with the current government they are not making things easier.

It is these thoughts that have been concerning me since the Israeli elections almost two years ago in February 2009. Since that time there has not been much to brighten my mood.  I still travel to Israel on holiday, still write out the occasional cheque to charities that support Israel, but my support has been dwindling: the Israel that I support is not the Israel of 2011, it is the Israel of the past and hopefully the Israel of the future.

The public voice of the Zionist left appeared to have got quieter and quieter, it was not being heard and not being paid attention to. The fight in mainstream Israeli politics has been between the centre-right (Kadima), the right (Likud) and what I think is fair to be described as the far-right (Yisrael Beiteinu). Just as the doom and gloom on this matter has been setting into a steady state, I was delighted to read that yesterday a demonstration of between 10,000 and 20,000 Israelis descended on Tel Aviv:

Under the banner of the “Democratic Camp”, a coalition of organisations and prominent individuals, the marchers heard speakers lambast the Israeli government, singling out the rightwing foreign minister, Avigdor Lieberman, who is seen as threatening Israel’s democracy.

There were mainly Jews but also some Arabs in the crowds. Moreover, this was not simply a bunch of radical anti-Israel leftists demonstrating. The Jerusalem Post reports:

The event brought together activists from over 50 organizations, as well as several MKs including Daniel Ben-Simon, who resigned from the Labor Party this week, Nitzan Horowitz of Meretz, and Meir Sheetrit from Kadima.

Sheetrit told the crowd that revisionist Zionist leader Ze’ev Jabotinsky “would be turning over in his grave” if he saw the steps the Likud-led government was taking.

I have never demonstrated against the Israeli government previously. The last rally I attended was one in support of Israel held in Trafalgar Square in January 2009. But if truth be told, I truly wish I had not been in the UK, but been in Tel Aviv yesterday as if I had been, I would have been in the middle of the demonstration with a big smile on my face.

Gene adds: Here’s a photo from the Tel Aviv demonstration. The sign next to the Israeli flag says “Investigate me too.” The sign to the left of that says “We won’t shut out mouths in the face of racism and incitement.” The red flags illustrate that there are still old-fashioned leftists (not necessarily communists or anti-Zionists) in Israel. 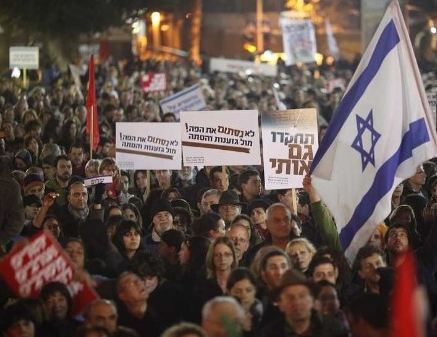