Nick Clegg can try to spin his party’s performance in the Oldham and Saddleworth by-election, where it was propped up by Tory votes, as much as he likes, but a poll out today gives the Liberal Democrats their lowest poll rating since 2004.

According to the ComRes/Sunday Mirror survey the party has sunk to 10% and if a General Election were held tomorrow the Lib Dems would be left with only 14 of its 57 MPs at Westminster.

The news comes as Ed Miliband appears to be scoring some success with former Lib Dem voters and is more popular than Clegg among those who voted yellow (but got blue) in the May general election. 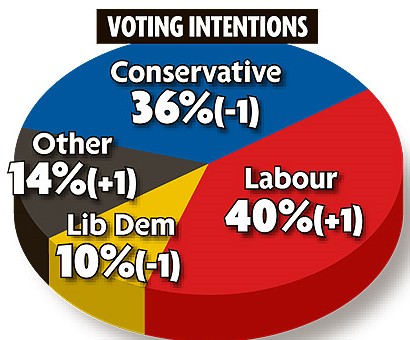 A YouGov survey found just 33% of those who backed Clegg’s party would do so again if there was an election tomorrow. And 41% would vote Labour and 11% Conservative.

One of those voters is Lord David Owen, the SDP founder, who has thrown his support behind Labour after abandoning it 30 years ago. Better late than never. Owen’s return comes after a meeting with Miliband who still has much to do.

A ComRes poll says Miliband, who was buoyed by Debbie Abrahams Labour vitory in Oldham, has failed to persuade even half of Labour voters that he is the man to lead the party. Only 22% of all voters think he is turning out to be a good Labour leader.

The poll says that while a third of people who voted Lib Dem in 2010 have switched to Labour one in five do not think Miliband is (as yet) shaping up as a good leader. “It appears that this support for the party is despite Ed Miliband’s leadership, not because of it,” said Andrew Hawkins, chairman of ComRes.

Still the good news keeps come as the Tories and the Lib Dems continue to bicker. The Tory right blames David Cameron for running a weak campaign in Oldham to prop up his coalition partner and the Lib Dems are calling for Cabinet Minister Eric Pickles to go.

Pickles, who said the Tories fought a “gentle” campaign in Oldham, has been labelled “incompetent” and his Department for Communities and Local Government should be scrapped. The call was made by Chris White, the Lib Dems’ leader on Hertfordshire County Council, who called for “regime change”.