George Galloway recently wrote a post for Socialist Unity about the civil unrest in Tunisia and the brutal reaction of the “Police State dictatorship.”

In fact behind the sunshine-facade the Tunisian regime is a dirty little secret. A torturing murdering repressive police state where the rights of the Tunisian people are crushed under the policemans boot.

Disappointingly not one commenter at SU mentioned the mind-blowing hypocrisy of Galloway– a cringing apologist for, and paid employee of, the torturing murdering repressive police state where the rights of the Iranian people are crushed under the policeman’s boot– writing these words.

So let me take this opportunity to do so.

Update: In Iran, people are crushed quite literally under the policeman’s boot. 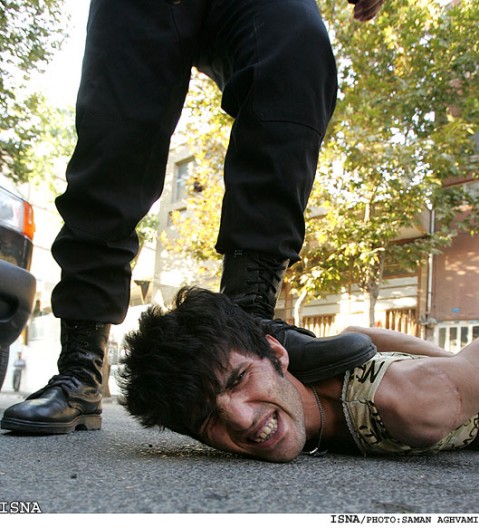 Alec adds: perhaps it has been the sight of Tunisian security forces beating and shooting civilians which has nudged Gabbleway into making this cri de coeur. Certainly, he showed no signs of concern for internal repression when he gabbled in front of Prime Minister Mohamed Ghannouchi during his Children’s Crusade last year.

Alec adds II: in December, Tunisian Police confiscated the unlicensed vegetable stall of and beat a young university graduate, who resorted to self-immolation. The current violence followed as an act of catharsis, not least due to frustration at State censorship of Internet traffic including reports of WikiLeak cables.

The problem is clear. Tunisia has been ruled by the same president for 22 years. He has no successor. And, while President Ben Ali deserves credit for continuing many of the progressive policies of President Bourguiba, he and his regime have lost touch with the Tunisian people. They tolerate no advice or criticism, whether domestic or international. Increasingly, they rely on the police for control and focus on preserving power.

Corruption in the inner circle is growing. Even average Tunisians are now keenly aware of it, and the chorus of complaints is rising. Tunisians intensely dislike, even hate, first lady Leila Trabelsi and her family. In private, regime opponents mock her; even those close to the government express dismay at her reported behaviour. Meanwhile, anger is growing at Tunisia’s high unemployment and regional inequities. As a consequence, the risks to the regime’s long-term stability are increasing.

In the wonderfully dry and sardonic tones of so many of his diplomatic colleagues, he went on to describe a lavish banquet thrown by President Ben Ali’s son-in-law, Mohamed Sakher El Materi. Frozen yoghurt and ice-cream were flown in from St. Tropez, and El Materi was said to keep a pet tiger called Pasha (reminding Godec of Uday Hussein’s lion enclosure in Baghdad) as well as pursuing business interests with some boorish, bungling freeloader of a Royal.

It appears difficult to under-estimate the contempt in which Ben Ali’s kleptocratic, nepotistic wife, Leila Trabelsi is held by ordinary Tunisians who compare her to a Carthagian despot (French language link).

Whilst Godec and, now, Hillary Clinton have not spoken of direct involvement by their country to effect an outcome in Tunisia, the French Foreign Minister, Michèle Alliot-Marie has appalled the National Assembly with suggestions that French riot Police could be offered to Tunisia.

Ben Ali’s initial defiant response to the situation, which he attributed initially to ‘outside’ forces has been replaced by obviously brown corduroy trousers following his dismissing his Interior Minister for ordering the use of lethal violence, and anounced his intention to stand-down as President in 2014 after 27 years.

In his cables, Ambassador Godec was clear in his concern that Al-Qaeda in the Maghreb could slither into any space left by a suddenly collapsed regieme in Tunisia.

Although disorder also is being seen in adjacent Algeria, this country has experienced all sulpher-drenched mayhem of Al-Qaeda and Islamic jihad. She, like a battle-shocked England in the 1650s, is likely to seek any compromise to avoid returning to this.

We only can hope that, should Tunisia bids a welcome farewell to her current gangmasters, Al-Qaeda in the Maghreb or its analogues are treated with short shrift.