We know by now how Wikileaks gatekeeper Israel Shamir has tried to link in the Wikileaks cables with his anti-Semitic conspiracy theories about why the democratic opposition in Belarus, Ukraine, and other parts of Eastern Europe oppose Soviet-style regimes and launch “Orange” revolution.

Like his dad, Johannes Wahlstrom clearly believes that US-backed forces are conniving to challenge political statesmen in the Ukraine in order to undermine Russia. Wahlstrom also believes that Israel controls Sweden’s media. Ironically, Wahlstrom is thought to be the source for Aftenposten’s recent use of Wikileaks cables.

Despite an initial flurry of outrage over Wikileaks’ relationship with Shamir and Wahlstrom in the Scandinavian press, all seems to have subsided now. This despite, Wahlstrom saying that his father Israel Shamir is the Swedish equivalent of Salman Rushdie.

This month, the Norwegian Union of Journalists are organising a talk by Wahlstrom, whom they describe as “the man who controls Wikileaks in Scandinavia”, and the freelance journalist “who this year signed an agreement with Wikileaks for exclusive access to their documents and the right to decide who they will be distributed to”.

So this must be Israel Shamir’s role too with Wikileaks. Assuming this information from Norwegian journalists is accurate, it would be interesting to see the terms of the agreement that Shamir and Wahlstrom signed up to. Until someone leaks it, I guess we’ll never know.

A fair number of people now have told me that Israel Shamir is obviously “out there” and holds some unsavoury views, but is harmless and probably not racist, so we shouldn’t be unduly concerned about Wikileaks working with him. I think this view is wrong, and I would like to explain why.

Shamir’s recent article on Wikileaks and Belarus has been translated into Spanish by the Cuban Holocaust denier Maria Poumier, and republished by Iran’s official broadcasting network the IRIB.

Shamir originally published his book “Galilee Flowers” [link: neo-Nazi site] in English on the website of the Nazi Holocaust deniers AAARGH!, which boasts of being the world’s largest site for Holocaust revisionism.

Here is Shamir with Pedro Varela at a fascist conference: 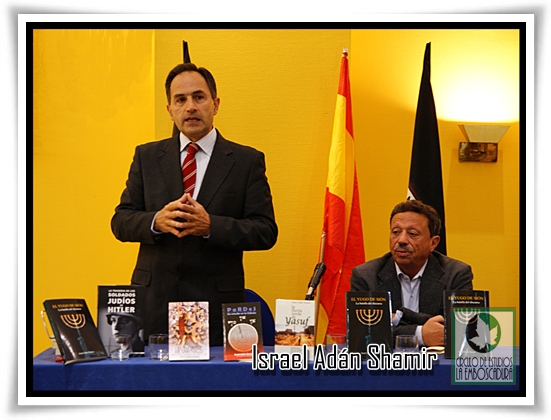 The conference was hosted by Juan Antonio Llopart Senent:

Llopart’s party is the Movimeiento Social Republicano, which is allied to the BNP, the Front National and Jobbik in Europe.

Shamir is also allied with Aleksandr Dugin, a pan-Russian nationalist who disdains the West.

Here is Shamir with German neo-Nazi Horst Mahler, who also believes the 9/11 attacks on America were justified:

Point is, Shamir isn’t just some harmless nut-job. He is quite clearly a neo-Nazi in league with other neo-Nazis. He is now publishing unredacted cables in the conspiracist magazine Counterpunch, and indeed on his own homepage. Furthermore, Shamir has visited Europe’s last dictatorship representing Wikileaks, and boasted to the Belarussian authorities that he has a secret dossier on the opposition.

The immediate question I have is this: where next for Shamir and his cables?