Holocaust-denier and gas-chamber-denier “Israel Shamir” is Wikileaks’ representative in Russia. He presents Wikileaks cables in the Ruskiy Reporter newspaper. 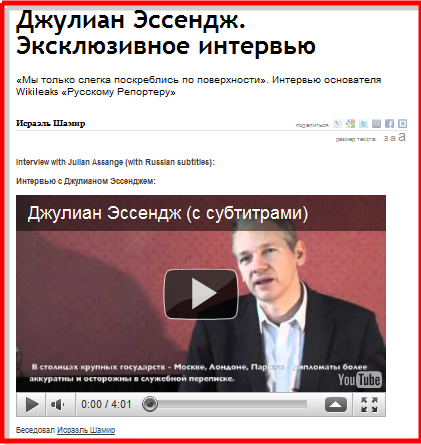 Here is the interview itself – in English with Russian subtitles:

Israel Shamir: “Did you find any compromising facts about Russia? Or maybe it’s just the reputation of American foreign policy will suffer losses because of this complication?”

Julian Assange: “Well there are a number of reports in there of people going into America embassies and talking about their colleagues, and sometimes that is people speaking about corrupt Russian businessmen, or allegations of corruption by Russian generals, and of course the view of the American ambassadors themselves about what the state of Russian affairs is. But generally, I see that it’s mainly the US presidence and how it operates, and also the actions of the puppet states that it has, or the American client states: these states that are supported and propped up by the United States, that often engage in terrible human rights abuses, or covert pushes towards war, or money laundering, or other forms of corruption. And those are often known about by US embassies working in these countries, but that knowledge is concealed.  So I think, over the long term, it is that latter category that is really going to start drawing attention.”