The Guardian reported in June 2004 the sentencing of Belgian serial rapist Marc Dutroux:

The serial child rapist and murderer Marc Dutroux was sentenced yesterday to life in prison with no possibility of parole, bringing an end to a case that has haunted Belgium for nearly a decade.

Dutroux, 47, was convicted last week of abducting, imprisoning and raping six girls between the summers of 1995 and 1996. He was also found guilty of murdering two of the girls, 17-year-old An Marchal and 19-year-old Eefje Lambrecks, as well as an accomplice, Bernard Weinstein. Two other girls starved to death while being held in a hidden dungeon in his basement.

In late August 0f this year, the Australian reported:

WIKILEAKS is at the centre of a new row after publishing uncensored police files from the investigation into a child killer.

The files include lurid evidence and wild accusations against one of Belgium’s leading politicians.

A senior prosecutor vowed to try to block the 1235-page dossier, much of which is drawn from interviews with rent boys and with Marc Dutroux, a pedophile who was jailed for life in 2004 for killing four girls and a former associate.

The Australian also noted how Wikileaks’ response had impacted on Belgian society:

A leading Belgian politician was cleared of any suspicion of pedophilia or connection with Dutroux in 1996 after being named during the investigation. The dossier published by WikiLeaks revives those allegations against the politician, adding to the sense of outrage in Belgium.

“There is some true, some false, some very disparate information here, involving some people who have done nothing wrong, who have simply been mentioned in an investigation and are thus exposed to public contempt, whereas all this material should have remained classified,” said Cedric Visart de Bocarme, the prosecutor general of Liege.

“There is some wild stuff in these documents. Some witnesses are prejudiced and would say anything to try to blacken their neighbour, to make themselves seem white than white.”

Kristinn Hrafnsson, a spokesman for WikiLeaks, said that he was surprised that the material had caused a stir now. “It comes at a time when there is a lot of controversy around WikiLeaks – it is very interesting,” he said. “It is a bit of an old story.”

Asked whether WikiLeaks would consider removing or redacting identities in the files, he said: “That has not been discussed.”

The dossier mentions names, telephone numbers, addresses and bank details of witnesses and people involved in the investigations, including high-ranking Belgian politicians such as Elio Di Rupo, currently leading talks on formation of a new government.

Di Rupo was suspected to have been a member of a paedophile ring linked to Dutroux, but was cleared of all wrongdoing. The WikiLeaks dossier includes testimonies of men claiming to have been abused by Di Rupo as minors, which were later disproved.

The pages put online by Wikileaks contain horrific accounts from those near and far from the case: victims and accomplices alike. One of them, notably, is enough to make your blood run cold. The testimony from the witness “X1”, Regina Louf – a young woman who tells investigators about the abuse she suffered at the hands of pedophiles, and the murder of a young girl that she had witnessed. According to her, Marc Dutroux was not acting alone, but was part of a wide network. But here is the problem: her testimony was not taken into account during the Dutroux trial, as Regina Louf had been declared insane. What is the interest, then, of publishing such a testimony on the web?

The father of one of the victims of Marc Dutroux, Jean-Denis Lejeune, has likewise deplored the “placing on the public square” of these parts of the dossier, suggesting that “this is not a normal approach”. Suzanne Hage, a legal specialist that RTL-TVI contacted, opines that this upload is “totally illegal with regards to the Dutroux dossier, given that the case is now closed, and the information has not yet been released to the public”. Indeed, the access to these documents should be exclusively reserved for the judicial authorities and the lawyers of both parties. 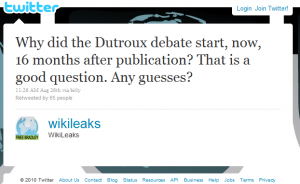 An immature response to a serious situation. Wikileaks is being criticised for having published something sixteen months prior, but this is not the point. There are some weighty reasons why Wikileaks should not be putting these personal details into the public domain, which Wikileaks does not appear concerned about.

As the father of one victim notes, Wikileaks’ response is a distinctly odd approach to such a trial. Clearly, there is no moral value in reproducing this information. It will surely only lead to anxieties, misunderstanding and unrest.

But here’s the thing: Wikileaks is convinced by its own mission that it can and should publish anything in the interests of freedom of information, no matter what the consequences might be. No concern for those named, innocent, guilty or otherwise.