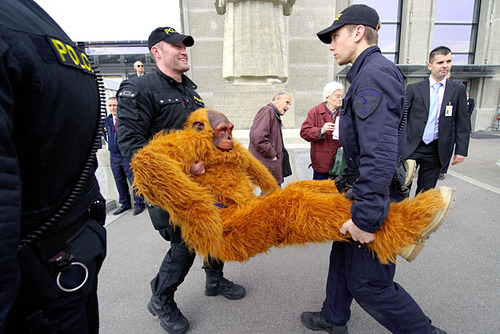 In 2005, writing in the anti-Establishment and pro-workers Daily Mirror, the King of the Swingers, Tommy Sheridan eulogized a recently departed friend.  Michael Stewart died following a violent altercation, which may not be statistically surprising considering:

Mick did serious bird as a young guy for his part in a fight that resulted in another young man losing his life. He was trouble-free over the 20 years I had the pleasure of knowing him and only turned 50 in April.

Unless, as this week’s Sunday Herald reveals the “young man” was a 38 year old prostitute called Joan Myers, and her ill-described loss of life involved being beaten to death by Stewart and two other men until her skull cracked like an egg.

I cannot find further details of Stewart’s death and any investigation/trial against his attacker, although events were serious enough for his body apparently to be held by Police for four months, as Sheridan further used his newspaper column to announce the funeral in August.

It would, therefore, be inappropriate to comment on Stewart’s character at the time of his death.  Such discussion can, however, be directed at Paul Ferris, whom the same Sunday Herald article states Sheridan attempted to bring into community meetings about knife crime when he still was an SSP MSP.

Although, unlike Jack Abbott, he did not murder anyone after being released from gaol, Ferris was a violent gangster and convicted gun-runner whose subsequent publishing career led to plans for preventing such criminals from profiting from their memoirs.

Following the Luciferian fall of Steven Purcell, the Daily Record reported on Ferris’ links to this former Labour chief of Glasgow City Council.  Maybe a risky move, considering that Ferris’ co-author was Reg Mackay, columnist and crime correspondent for this newspaper;  which assured readers that local psychopath, Kevin Carroll had a heart of gold.

It makes you wonder how it and Sheridan would have eulogized Stringer Bell after his similar murder.  As supporting small businesses?