Here is some more drollery from the East London Mosque:

The controversial speakers who were able, in the past, to speak via third-party bookings of our facilities (circumventing our procedures) have now all been banned. All accusations of ‘extremism’ links are also historical: it is two years since the Awlaki issue arose, for example, and since then we have tightened our procedures and policies accordingly, to ensure no such issues arise again. Let me state once more: we deplore extremism of all kinds and fully support democracy.

Earlier this month the mosque’s London Muslim Centre hosted the Cageprisoners crowd, including Cageprisoners patron Yvonne Ridley and Asim “it is incumbent upon all of us to support the jihad” Qureshi. The purpose of the meeting was anti-American agitation on behalf of Aafia Siddiqui, the crudely antisemitic woman convicted earlier this year of attempting to murder US soldiers and officials in Afghanistan.

Cageprisoners were among Awlaki’s most ardent supporters in the UK, long after it was abundantly clear he was a preacher and recruiter for al Qaeda.

They are also big fans of the Taliban, as you can see here (click to enlarge) in a post defending Muslims who live in Britain and travel to Afghanistan to fight Western troops.

This is what makes the recent visit to the East London Mosque of the US ambassador to London so grotesque. Unsurprisingly, the mosque flourishes that feather at every opportunity, including in this press release.

In this context, the visit by the US ambassador echoes the attempt by President Obama to build upon the speech he delivered in Cairo last year. We are fortunate to be in the forefront of building bridges between the Muslim communities in the West and America.

And here is the speaker line-up for an event at the London Muslim Centre on 23 January 2011: 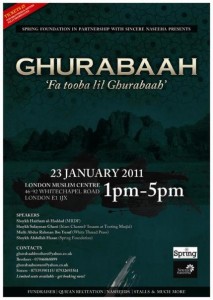 Let’s take a brief look at just one of the speakers, Mr Haddad. Here he is on why the Gaza war was wonderful:

What about democracy? Haddad does accept it. Most grudgingly, and merely for tactical reasons. Islamic law is far superior, but it simply cannot be established in Britain:

It is clearly evident to any Muslim who possesses a basic understanding of Islam that the greatest and most important aim of Islamic law is the deterrence of evil or the reduction of harm, and the attainment of good or its increase. The establishment of a harmonious and successful way of life depends upon this principle. This is why the Islamic law – that is, the law of Allah – is never contrary to the basic needs of humanity, or establishes anything in contradiction to sound logic.

Subsequently, it is an obligation upon every Muslim to achieve this aim, whether in part or in its totality. However, it is apparent that it is virtually impossible to attain this objective in its absolute sense, in the majority of cases; yet, in spite of this, the Muslims must endeavor to carry out the necessary means that enable them to achieve this objective.

Based on this, it is obligatory for those Muslims living under the shadow of man-made law to take all the necessary steps and means to make the law of Allah, the Creator and the Sustainer, supreme and manifest in all aspects of life. If they are unable to do so, then it becomes obligatory for them to strive to minimise the evil and maximise the good.

In democratic countries which are ruled by man-made law, candidates from the various parties compete to attain power. Some of these parties or candidates are working against the benefit of humanity (i.e. against the law of the Creator), while the policies of others are less detrimental. Therefore, it is obligatory on the Muslims to utilise all means to promote the candidate who will best ensure the welfare of the people according to Islam, the law of their Creator, to be elected to the decision-making posts.

Support for the vile antisemitic terrorists of Hamas? Calling for the annhilation of Israel and Jews to “go home”? Joy that Muslims are preparing for jihad “all over the world”? Lamenting the “shadow of man-made law”?

Yes, only a wicked ZioCon Islamophobe could consider such views “extreme”.