Until last year, Mahmoud Abu Rideh was detained in 2001, and placed under a control order in 2005.  This is why:

He arrived in Britain in January 1995 and claimed asylum, living off benefits with his wife and five children.

His asylum claim was initially refused because his story was not credible but he appealed and was granted refugee status in November 1998.

On December 19 2001 he was arrested under immigration rules which said he was “an active supporter of various international terrorist groups, including those with links to Osama bin Laden’s terrorist network.”

The central allegation was that he had been involved in fund raising and distribution of funds for terrorist groups with links to al-Qaeda as well as procuring false documents and facilitation of the travel for volunteers to training camps in Afghanistan.

Although he was living on benefits, he was said to have raised around £100,000 in just two years, using the Arab Bank in Park Lane to funnel his money to al-Qaeda.

He was said to be closely involved with senior extremists and associates of Osama bin Laden both in Britain and overseas.

Among them, he was described as “heavily involved” with the radical preacher Abu Hamza, who he said he regarded as “sincere but indiscreet.”

He was also described as “well-acquainted” with Abu Zubeida, a senior member of al-Qaeda later captured by the Americans, as well as other extremists who were associated with al-Qaeda.

A letter sent in the summer of 2005 by Ayman al-Zawahiri, the deputy head of al-Qaeda, to Abu Musab al-Zarqawi, the head of al-Qaeda in Iraq, referred to a book, The Knight under the banner of the Prophet, which he had passed to Abu Rideh for publication.

During this eight year period, Abu Rideh was a poster boy for Amnesty, CagePrisoners and the Guardian.

Amnesty ran a campaign against the control order to which Abu Rideh was subject from 2005-9. You can read their output on this case here.

CagePrisoners, whose Director Moazzam Begg believes that “securing the release of Muslim prisoners” captured during jihad is “obligatory” on all Muslims, devoted significant campaigning resources towards this case. Here is an interview that Begg conducted with Abu Rideh, where Begg claimed that he had worked with the Al Qaeda activist to build a school for girls:

MAR: My work before – I have – like a charity. I help people in Palestine, Afghanistan, Kashmir, Chechnya – any country that have problems, I help them. I have charity, Islamic Services Bureau and I have two schools in Kabul, Afghanistan.”

Moazzam Begg: I know that very well, because we worked together to build that school, which we all had problems with, for girls. And for our readers – I think it is very important for our readers to know this – that the school that you began, with many people, including myself, helping in it, was for girls in a place where the rest of the world was saying that the Taliban did not allow female education, when in fact Muslims were helping to set up schools, like yourself, for girls in Afghanistan.

The Guardian also lined up behind poor Abu Rideh. Here’s a nice friendly little piece entitled “A day in the life of a terror suspect“. And here’s a video of the man. There’s loads more.

The Indie also did what they could for the poor man. Here is a nice article by Fisk. They also ran this photograph of Abu Rideh’s children: 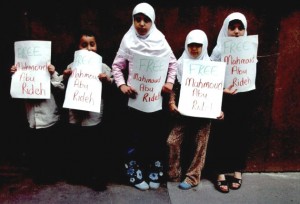 Eventually, after control orders were struck down by the courts, Abu Rideh was persuaded by the Government to leave the country, and go to Syria, on the understanding that he would not return to the United Kingdom. In effect, we exported a known Al Qaeda militant to another country. This really was the only choice left to the Government.

He did not stay in Syria. Instead, he travelled to Afghanistan, to join up with his Al Qaeda brothers.

Over the weekend, an “Arabic jihadi web forum associated with al-Qaeda reports that he has become a “martyr in Afghanistan” and was with a group of fighters when he died”.

As we speak, I expect that Moazzam Begg will be filing the papers in the High Court for a personal injuries claim on behalf of his old friend.

Something leapt out at me in the Telegraph article about Rideh. It concerns the “school for girls” that Begg was allegedly helping to set up and run in Afghanistan –

[Rideh] claimed to have studied at the Islamic University in Islamabad and then turned to helping Afghan refugees, opening a school in Afghanistan for the children of Arab speakers and running projects such as the construction of wells and provision of food relief.

But he admitted that among the fathers at the school were “some of the world’s most wanted men.”

The key detail is that the school was for “Arab speakers.” Put this together with Rideh’s admission about the “wanted men”, and it’s clear that Begg and Rideh were essentially running a kindergarten for Al Qaeda.

So it’s not surprising, really, that Begg has been so coy about the details of this “school”.