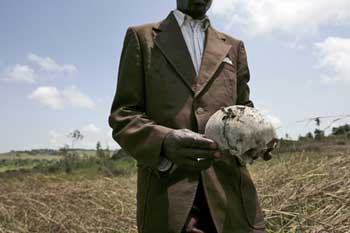 Alan A’s blog-post on suggestions by Joseph Kabila, who may or may not be Laurent Kabila’s son, that MONUSCO depart the Democratic Republic of the Congo led onto David Patrikarakos’ dispiriting article in the New Statesmant.

This, in turn, reminded me of the Bogoro Massacre.

During the Rwandan Genocide (the massacres of 1994, just to distinguish it from previous and subsequent human catastrophes in the region), John Littledick charmingly refered to events as “If the Mbongo tribe wants to wipe out the Mbingo tribe then as far as I am concerned that is entirely a matter for them”. Although deadly serious for all concerned, the Bogoro Massacre has been linked to predominately tribal rivalries rather than a desire to control mineral resources, as opposed to how Patrikarakos presents the 1998 Rwandan invasion of then-Zaire.

In Ituri Province in the north-east of the country, Bogoro village was a mainly Hema-populated village when moves to end the Ituri War saw strengthening alliances between Hema and Lendu groups through the the Front for Integration and Peace in Ituri in late 2002. It sits on a major route to Uganda, and the surrounding area was held by the mainly Union of Congolese Patriots.

On 24 February 2003 the village was attacked by militia led by Germain Katanga, the Ngiti head of the Patriotic Resistance Force in Ituri and who had been frozen out of the Hema/Lendu accords.

One of his senior commanders was Mathieu Ngudjolo Chui, a Lendu from the who personally – and through his command in the National Integrationist Front – had lost influence.

What followed was not, as John Littledick would say, a bout of random violence, but well orchestrated and equipped. After encircling the village, militia advanced with firearms and heavy weaponry before rounding-up and killing anyone not able to run away.

The elderly, children and pregnant women formed the major part of the dead: of the 200+ confirmed dead by the UN, some 90% were killed by machete.  The above photograph shows the skull of a victim with hack-marks.

I have read accounts of jembes being used.  Having wielded one of these myself – albeit not against a recumbent person – I know just how much determination would be required to use these as a lethal weapon;  more so than machetes.

The Ngiti and Lendu were victorious, and virtually all the Hema fled and soon control of the area fell.

Ghastly as the attack was, it was one act in the Ituri Conflict which claimed tens of thousands of lives, and arose during the destablizing influence on Hutu genocidaires arriving in the mid-1990s (as Patrikarakos said,in 1998 Rwandan forces headed not for Ituri but for the mineral rich areas).

The racist ideology of the Rwandan Genocide was borrowed to present the agriculturalist and Sudanic-speaking Lendu (and Ngiti) as the rightful heirs over the pastoralist and Bantu-speaking Hema. Not all Hema are Bantu-speaking: a linguistic division leaves a great many, in fact, speaking Lendu; fudging distinctions just as with the supposedly Ethiopic Tutsi.

The attack was referred to the ICC in March 2004, and warrents issued in July 2007. Katanga already was in detention in the now-DRC, and was promptly transferred to The Hague. Ngudjolo Chui was captured by Congolese forces in February 2008, and transferred shortly afterwards.

The trial began in June 2008, so should be nearing the end. I have had difficulty confirming this as there is relatively little in the Anglophone media.

Probably because they do not have European names, consort with glamour models and film actors and are represented by rap-quoting QCs.