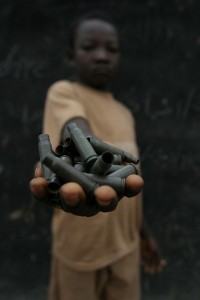 Despite the absence of well-known supermodels and actors for over two months, the war-crimes trial of Charles Taylor, 22nd President of Liberia has continued at The Hague just as it had been in process for almost two years beforehand. The final witness was called on 9 November, and the defence team rested its case on 12 November.

Closing arguments are scheduled for February 2011. Obviously, it is not know what lead defence lawyer, Courtenay Griffiths QC will say, but I hope he does not appropriate any more rap lyrics from 30 years ago. More than anything else, judging by his advocacy history, I assume he would take a dim view of such frivolity from fire-arms Police officers.

As these arguments are prepared, another war-crimes trial of an African thug-in-government has opened at The Hague, albeit delayed by some six months. Formerly the leader of the rebel group, Movement for the Liberation of the Congo, between 2003-07 Jean-Pierre Bemba Gombo was a senator and one of the vice-presidents in the transitional government of the Democratic Republic of the Congo.

This unravelled during pre-election violence across Kinshasa in March 2007 in which members of all parties were involved, as a result of which the judiciary placed primary responsibility on the MLC and sought to remove Bemba’s immunity. Bemba first sought refuge in the South African embassy, and then left the country with his family, ostensibly for medical treatment in Portugal.

The final indignity came in May 2008, when he was arrested in Brussels on an international warrant requested by the Government of the Central African Republic. Some of the reports of atrocities committed across the region during the Lord of the Flies type madness which has gripped it for almost two decades are quite sickening: not least the recent instance of a mass-rape (apparently by Mai Mai militia Rwandan Hutu FDLR) of hundreds of women and girls in Luvengi, eastern DRC.

Bemba is accused of similar, and worse such as cannibalism during his actions as a proxy of the then CAR President, Ange-Félix Patassé in and about 2002. It was from this that Bemba originally was charged with five counts of war-crimes and three of crimes against humanity, although three have been dropped. Perhaps disastrously for the Congolese victims of the MLC, no charges relating to Bemba’s actions in the DRC have been brought: not least the Effacer le Tableau (“wipe the slate”) assault against the Mambasa territory of Ituri district in November 2002, with all the suggestions of ethnic cleansing.

Love him or loathe him, one of the positive effects of Tony Blair’s attitude towards armed-intervention against state and non-state actors has been the increase in such trials. Although Patassé remains at liberty in CAR, and intending to run as a candidate in the General Election now scheduled for January 2011, papers relating to the same actions which Bemba is on trial have been served to the ICC by the CAR Government; and the first witness to speak has knew that Bemba’s MLC were engaged in looting and pillage.

Hissène Habré , the 8th President of Chad remains unmolested in Senegal despite attempts by victims of his reign and the Belgian Government to order his extradition. With the trials of Taylor and Bemba, hope has been injected. On Taylor’s arrest, his former mentor, Muammar Qaddafi said “This means that every head of state could meet a similar fate. It sets a serious precedent”.