This is a cross-post by Shiraz Maher from Standpoint Magazine

Gabriel Latner, a second year law student at Cambridge University now famous for his audacious speech at the Union last month, is running for Union President this week. Hustings take place on Thursday and the vote is on Friday.

Here’s the back story.

The Union hosted the following debate last month: “this house believes Israel is a rogue state”.

Latner spoke for the motion, arguing that Israel is a rogue state. He was joined by the hysterical Lauren Booth (famous only for being Tony Blair’s sister-in-law), and the more impressive Mark McDonald, a barrister, and founder of Labour Friends of Palestine and the Middle East.

His speech has become one of the most controversial to have been delivered in the chamber for some time. In a nutshell: Latner argued that Israel is a rogue state because it does not conform to regional standards.

By upholding human rights, maintaining an independent judiciary, and ensuring both legal and constitutional equality, Israel is a rogue by comparison to its neighbours. (You can read his speech in full here).

Latner – and I don’t say this uncharitably – is reminiscent of ‘the Finch’ from American Pie. It pervades his character:  the venturesome nature of his speech, the sheer audacity of what only he knew was coming, the brilliant but cheeky subversion of it all.

That view was only reinforced when, once he had taken to his feet in the chamber, Latner addressed his hipflask before the audience.

The speech epitomised everything the Cambridge Union should stand for – a counter-intuitive, original, and clever argument. Latner deserves applause and recognition for that.

Instead, he was escorted off the premises minutes after the debate ended.

Earlier, before Latner started his speech he leaned over to Booth and whispered, “I am going to nail you to the f****** wall up there”. For a clever guy, it’s not the smartest thing he’s ever done – but you have to admit it’s funny as f***.

Booth complained vigorously about this and Latner was subsequently escorted off the premises by security, banned for life by the current President and then, on appeal, readmitted.

During that time, the issue has refused to go away. Latner’s speech has gone just about everywhere, the debate itself was reported in the press, Laruen Booth howled about the injustice of it all to anyone who would listen, and several student societies wrote to the Union complaining about Latner.

GABRIEL LATNER @ The UNION, Round 2:

After the success of his Union debut, which critics are calling “brilliantly audacious”, “pretentious”, “zionist dog lies”, and “so titillating it made Lauren Booth see God”, Gabriel Latner is returning to the Union.

The appearance is part of an international press tour for the launch of his new book ‘My Life in Mossad – The Confessions of a Petunia Arranger’.

No one knows for sure what Latner intends to say at the Union, but sources close to the reclusive author have indicated that the address is “so riveting it will have the audience glued, nay, nailed to their seats”. (See for yourself, Thursday @ 7:00)

Fans may recall that Latner was escorted out of the Union by security personnel after his last address, out of concern for his safety. A deranged debater was so moved by his speech, that she proceeded to re-enact Glenn Close’s “rabbit scene” from Fatal Attraction. Commenting on the experience Latner said “It was all a little much. I mean, it was just a speech. Yes it was brilliant. Yes it made Dr King’s ‘I have a Dream’ look like a speech by Sarah Palin. And yes, I am incredibly dashing in a tuxedo. But for a 50 year old woman to throw herself at me like that was just wildly inappropriate. That kind of thing just shouldn’t be permitted in polite society. Frankly, I’m a little concerned about the general state of the Union’s morals. Did you know that they have an entire wall devoted to sexual intercourse?”

Why Vote for me? (BESIDES A CHEAPER BAR)

1.       After certain recent events I’ve probably read the Union Constitution/Rules more times than any living member. Might come in handy to have a President who knows the rules.

2.       I will actively seek members’ input and suggestions, specifically with regards to motions. We need to get rid of VAGUE and REPETITIVE debate topics and start having debates on RELEVANT ISSUES. Ms Hill wants to let you help decide the emergency debate motions. I want to have your help choosing MAIN DEBATE TOPICS.

3.       CHANGE IS GOOD, BUT IF YOU WANT TO CHANGE THE ESTABLISHMENT, YOU CAN’T BE PART OF IT. I WON’T INVITE D-LIST CELEBRITIES TO THE UNION. They add nothing, and make us look bad. And they’re usually horrible debaters.

4.       IT WILL BE REALLY, REALLY FUNNY. Think about it. What could be more annoying to the cadre of self-important, arrogant toffs who feel that they’re some how entitled to run the Union, than electing someone who won’t listen to a word they say? Plus, irony is funny.

5.       I’M OFFERING CHANGE. The other candidates are long-time Union personnel. I’m not. I’ll be honest, they have more experience than me, but that shouldn’t be what decides your vote for two reasons:

a.       Any NECESSARY experience I can pick in my term as President-Elect.

b.      They have experience- running the Union the wrong way. Whichever of the other candidates you vote for, you can be fairly sure you’ll get another term of the SAME MEDIOCRE DEBATES. I’m offering you a legitimate alternative.

Latner has also done an interview with The Tab – one of the student rags in Cambridge – where he tells them, “I’m a fan of irony”. He goes on:

The Union is like Cripps Court. People on the inside think everything’s fine. But everyone on the outside can tell those buildings are ugly as sin.

Meanwhile, Lauren Booth is still huffing and puffing about Latner, saying his decision to stand for election is:

an insult to the members of the debating union whose own rules he mocked and clearly has no respect for.

I would also like to ask [the President] James Counsell why he has re-instated this creature when his ban was supposed to stand unless I received an apology for his rude, drunken behaviour.

Latner has apologised – but Booth refused to accept it. That attitude has characterised Booth’s conduct throughout this whole affair. She has tried to slam Latner at every possible opportunity since he obliterated her shrieking pleadings in the Union. Whipping up sentiments against Latner in Cambridge was bad enough – but I also suspect she was also behind some of the stories which appeared in the press about it too.

The irony – of which Latner is no doubt all too aware – is that all this publicity might help him win on Friday. I hope it does. 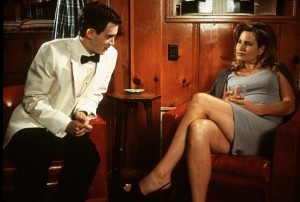 For speaking to the press, a violation of the Union’s election rules, Latner has been fined 20% of his vote!