Nick Clegg said he wanted to wake up a new generation of young people and students, with his progressive brand of politics, just not quite like this where he is the target as the second wave of student protests against tuition fees gets into full swing today.

Clegg and the rest of the Lib Dems who are also being targeted on a constituency level today will surely end up paying a high electoral price for this. 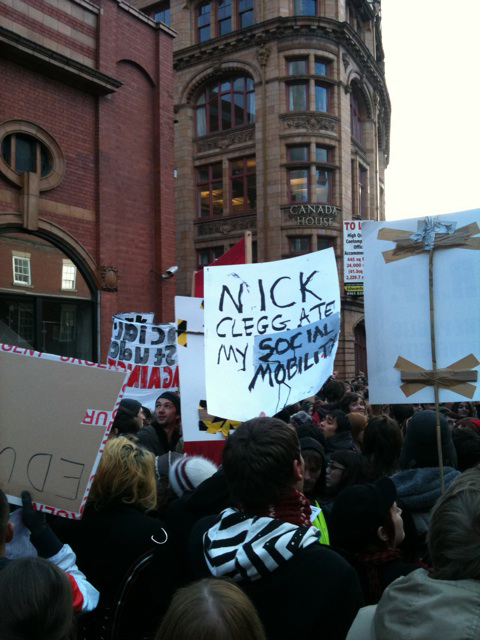 It’s almost entirely peaceful well organised demonstrating, but already 56 have been arrested in London where the police are not getting caught with the pants down again. There are some great tweets being sent on Twitter today under the hashtag #demo2010. There is also alive stream of demo pics here. Really interesting to see how students are turning to social media and using it so well. It is proving a boon both as tool to organise and share information helping to link up local actions taking place today.

It is a real shame that it has tipped over a little in London with the attack on the police riot van and you just know that this is one of the headlines the right wing press and the Government will use as a way of diverting attention for how they are pricing those from less well off families out of education in this attack on social mobility.

Having had a free education and left university with very little debt I’m not sure what I would do today if it meant being saddled with such a huge sum at such a young age. It is a huge and unfair burden. It is why the graduate tax makes so much sense to me.

I don’t expect Nick Clegg ever expected to see himself depicted like this: 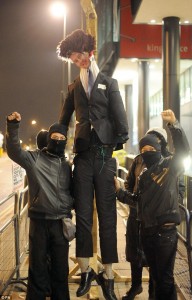 That’s essentially because he never expected to be in power, having to make unpopular decisions. Ah well.