Jaafar al-Hasabi, a 38-year-old British-Bahraini with a wife and five children, has been detained without trial in Bahrain since mid-August 2010 (Ramadan 1431). Jaafar graduated from Middlesex University in 2009 with a B.Sc. in Business Information Systems with Information Technology. He studied my module (Decision Support Systems) in 2007, which is when I got to know him briefly. He was an activist amongst some of the Arab communities in London, and seemed to be a pleasant person. 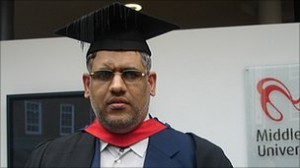 Jaafar went to Bahrain with his family for the summer holidays, believing that the crackdowns on political dissidents were a thing of the past. From there, he travelled with his elderly mother to Iran to visit Shiite religious sites. On his return, he was arrested by the Bahraini authorities and has remained in detention since. His wife and children were unable to see him after his arrest and have returned to the UK, where the children are back at school in North London.

Jaafar has repeatedly alleged that he has been tortured in prison. His Bahrain-based lawyer repeated this allegation to BBC Newsnight. Jaafar had previously alleged that he had been tortured in the 1994 before coming to the UK. The British and Bahraini governments and embassies need to act swiftly to rectify any injustices that may have occurred. We can help by campaigning appropriately for justice.

Jaafar’s only crime is to campaign peacefully in the UK for political reform in Bahrain, a near-absolute monarchy. Jaafar and others are accused of being part of a terrorist network, although not a single weapon has been recovered. The regular tyre-burning by disaffected and disenfranchised Bahraini youths is dwarfed by the current, violent civil unrest in France (October 2010), but is described as terrorism by the government of Bahrain.

Jaafar and other detainees and their lawyers allege that they have been tortured, sexually abused and beaten whilst in custody. Organisations that have expressed serious concerns about torture include Human Rights Watch, Amnesty International, Reporters Without Borders and the Human Rights Committee of the Bar Council of England & Wales.

We understand that Jaafar is a dual citizen, and so this constrains the UK. However, we know that the FCO, quite rightly, intervenes in cases of forced marriage abroad (including in Bahrain, as shown by our embassy’s page), treating dual citizens as though they were sole UK citizens. In a case as serious as Jaffar’s, involving alleged torture, we very much hope and expect that the FCO will treat Jaafar similarly, as though he was a sole UK citizen.