Rosie Bell (who comments here as KB Player) recently visited Syria, where she took this photo of a bookshop window in Aleppo. 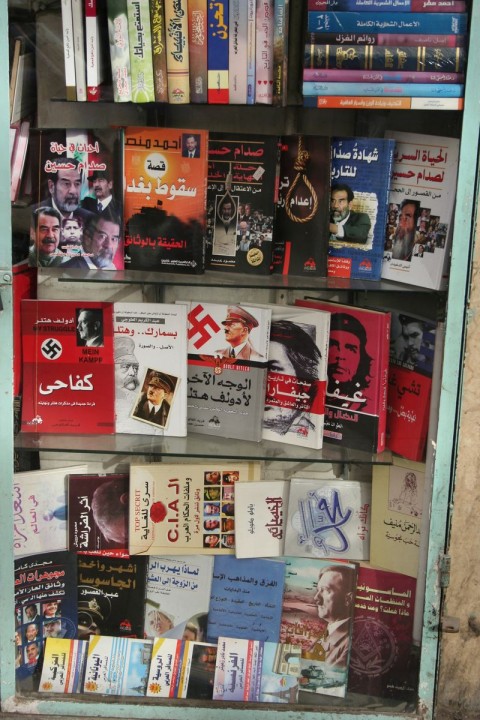 What strikes me is the row consisting of three books about Adolf Hitler and three books about Che Guevara. The Hitler books are “Mein Kampf” (by you-know-who), “Bismarck And Hitler” and the ominously-titled “The Other Face of Adolf Hitler” (the one who loved children and dogs, and only wanted what was best for Germany?). The titles of the Guevara books are obscured, but I think it’s safe to assume that all of them are hagiographies of some sort, and none of them deal in detail with the hundreds of summary executions for which he was responsible.

And of course there’s no comparison between the evil for which Hitler and Guevara were responsible. But it’s interesting that the bookseller (reflecting received and benign opinion about them?) considers them worthy of such grouping.

Another book is entitled “The Freemasons and Secret Organizations – What Did They Do? And Who Did They Serve?” (Any guesses on the answer to that last question?)

Thanks to DaveM, for the translations. Dave, who spent a year in Syria learning Arabic, writes: “That mixture of existentialism, poetry, self help, metaphysics, paranoia and rabid antisemitism sure does bring back memories!”