Harry’s Place having a splendid fit about @lowkeyuk being mentioned in @theguardian here:http://bit.ly/9rBmjo3:53 PM Nov 4th via TweetDeck

Lowkey is a rapper whose lyrics recycle racist canards about  “Jewish” companies, which supposedly channel their profits to Israel. In one track, ‘Long Live Palestine’ Lowkey says:

‘Every coin is a bullet, if you’re Marks and Spencer,
And when your sipping Coca-Cola,
That’s another pistol in the holster of them soulless soldiers,
You say you know about the Zionist lobby,
But you put money in their pocket when you’re buying their coffee,
Talking about revolution, sitting in Starbucks’

You find this sort of stuff on the neo Nazi far Right as well. But that’s not a problem for the Pluto Press.

A few years ago, Pluto Press published a book entitled The Final Energy Crisis which was edited by Andrew McKillop. Mr McKillop, according to the anti-fascist organisation Searchlight was “a member of the BNP’s ‘inner-circle”. Lancaster Unite Against Fascism identify him as a partner of Nick Griffin in a development in Croatia. There’s more on Andrew McKillop in the Observer. 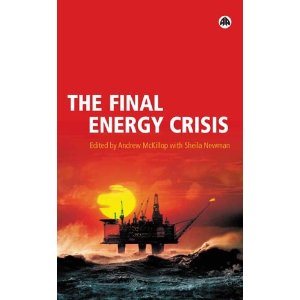 Given that Pluto Press was founded as the publishing arm of the extreme Left revolutionary party, the Socialist Workers Party, their fondness for Lowkey is no surprise.