Yesterday, Andy Burnham wrote in the Guardian how the Tories had chewed up and spat out Nick Clegg.  He wrote how the party’s education policy was in tatters. This from a party which famously promised a penny on income tax to fund it.

“It will take time for people to absorb the full impact of Wednesday’s spending review, but one thing will be clearer today to many voters. Raucous Tory cheers for deep cuts will have helped cement an impression that had been forming in the public mind. This is no coalition government. This is a Tory government in which Liberal Democrats have accepted jobs.

“It is hard to detect any discernible Liberal Democrat influence in the detail of Wednesday’s announcements. One by one, Nick Clegg’s reassurances to his MPs, councillors and members are falling to bits,” Burnham wrote.

The Lib Dems have paid a price for their part in the coalition ever since the party entered into it. It has fallen month after month in the polls. In the summer YouGov reported that 48% of those who voted Lib Dem at the election are now less likely to do so again.

Now several months on, with its involvement in raising of tuitions fees and the deep spending review cuts, a new YouGov/Sun poll shows the Lib Dems just how bad a mess they are in. The Lib Dems are the fall guys. The political patsies of this coalition.

While the Conservatives are sitting pretty on 41% and Labour are close on 40%,  the Liberal Democrats have dropped to 10%. Their support is evaporating.

Last month the party was on 15%. During the election it rode high on 23%. Come the next local elections it will face some very angry voters and suddenly find itself with a lot of former councillors with time on their hands. 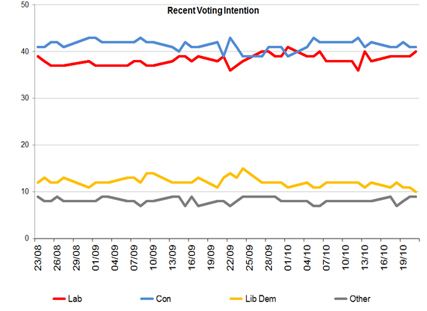