Ken Livingstone is a politician with a parasitic relationship with the Labour Party. He shows the party no loyalty at all. He stabs it in the back at every opportunity.

As a result of his recent conduct, he is now no longer a member of the Labour Party.

Back in the 1980s, Ken Livingstone was close to the Workers Revolutionary Party, a rape-cult run by a repeat sexual offender, Gerry Healy, who took money from Gaddafi and Saddam Hussein, in return for spying on trade unionists and other dissidents, and spreading racist conspiracy theories about “Zionist” plots. They used that money to run various scrappy far Left papers, one of which was Labour Herald, edited by Ken Livingstone.

It was a privilege to have worked with Gerry Healy.

Scroll forward to the 1980s, and Ken Livingstone had populated his administration at City Hall with members of Socialist Action, another revolutionary Communist party.

So little loyalty does Ken Livingstone have to Labour, that he ran against the Labour candidate for Mayor.

Then Ken turned up during the elections for a photo opportunity with George Galloway, a politician for the rival RESPECT Party. 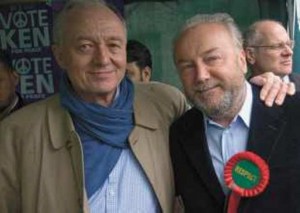 Now Ken Livingstone is campaigning for the expelled Islamic Forum Europe candidate, Lutfur Rahman, who is running against Labour’s Helas Abbas for Mayor of Tower Hamlets. 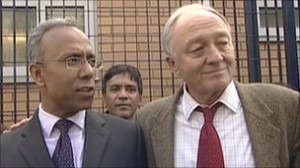 Labour’s candidate for London mayor, Ken Livingstone, has been campaigning with a non-Labour candidate in a separate local election in the East End, in breach of his party’s rules.

He backed Lutfur Rahman, an independent running to be mayor of Tower Hamlets.

Labour rules state that any member who campaigns for another party should be automatically expelled.

Mr Rahman ran as an independent after being deselected as Labour’s candidate over “serious allegations” against him.

These concerned both “the eligibility of participating voters” and Mr Rahman’s “conduct”, Labour said in a statement.

The effect of the rule is that Ed Miliband and the NEC do not have to do anything at all. Ken Livingstone is no longer a member of the Party. He’s gone.

Ken Livingstone’s departure from the Labour Party is no great loss. He is unlikely to beat Boris Johnson. His support for racists like Qaradawi and his championing of Islamist political parties loses Labour votes. We won’t be sorry to see the back of him.

Time to reopen the nominations for London Mayor.