Apparently Qazi Hussain Ahmed, the former leader of the South Asian Islamist party Jamaat-e-Islami, has been banned from the UK. He had a visa that was valid until 2015. It has reportedly been revoked. 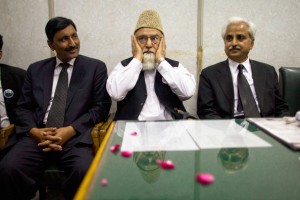 One fan is “shocked”:

One of the organisers of the tour in the UK, S.Hussain of the UK Islamic Mission, said he had also been told that Mr Ahmed’s visa had been cancelled. However, UKIM’s national secretary-general, Zahid Parvez, said he had not heard this. “We would be very surprised and shocked,” he said. “He has been to this country so many times, and has always talked about the need to bring people together.

He [Qazi Hussain Ahmed] also said Bin Laden could not have carried out the 9/11 attacks because he lacked the “ability”; he said the Jews had done it, first giving the day off to all Jews working in the World Trade Centre.

Ahmed was due to address several meetings on a UK tour organised by the UK Islamic Mission.

There is no word yet on two other senior Jamaat-e-Islami leaders due to take part in the same tour, Siraj ul- Haq and Abdul Rashid Turabi.

Mr ul-Haq was on form just this week, stirring up hatred against India as well as America and NATO:

The JI deputy chief slated the unconditional restoration of NATO supplies and termed it sell out of national interests. He said if the reopening was inevitable, the government could have made it conditional with the stoppage of drone attacks. The rulers in Islamabad should know that the American arms and ammunition reaching Afghanistan would be used against Pakistan. Unfortunately, he said, the Pakistani rulers had closed their eyes to vital national interests. India, on the other hand, had converted Afghanistan into the centre of its activities. As many as 17 Indian consulates on Pak- Afghan border were fully involved in activities against Pakistan’s independence, solidarity and integrity and were promoting terrorism in this country.

Whatever the visa fates of Messrs ul-Haq and Turabi, now questions need to be asked of the UK politicians who are also due to take part in the tour. Why on earth are they working with an extremist and racist party that has done more than any other party in Pakistan to promote the hatred and violence that has torn the whole region apart?

The politicians are Lord Ahmed and Anas Sarwar MP of Labour and Salma Yaqoob of “Respect”.

When Islamist preacher Zakir Naik was banned from the UK earlier this year, the MCB tried this line:

The Home Secretary’s action serves to demonise the very voices within the world ready for debate and discussion. The tour would have been a golden opportunity for young Muslims who are eager to hear the true messages of Islam which promote understanding between communities.

We shall see if they roll out a similarly ridiculous argument on behalf of Jamaat-e-Islami.

For now, here’s a little ditty for Mr Ahmed.