The “Global Peace and Unity” (GPU) conference will be held on October 23-24 in London. It is organised by the Islam Channel, a venture of exiled Tunisian Islamist Mohamed Ali Harrath.

This blog has covered some of the speakers:

– Pakistani politician Ijaz ul-Haq, who has said the murder of Salman Rushdie would be “justified” and supports notorious nuclear proliferator AQ Khan.

– Failed swuppie John Rees, who promotes the worst extremists in the Middle East he can find, including the “resistance” in Iraq, and wants to “cripple” the British government on their behalf.

– Syrian preacher Muhammad Al-Yaqoubi, who calls freedom of religion and expression “wrong and false ideals” and backs the murderers of US troops in Iraq.

– Egyptian Muslim Brotherhood extremist Zaghloul Al-Naggar. He wants Israel to be annihilated, believes in the foul antisemtic hoax The Protocols of the Elders of Zion, and incites violence against Egyptian Copts.

This is the perfect crowd for Neturei Karta, the tiny and reviled Jewish sect. After all, they are regulars at the Islamic Human Rights Commission’s Al Quds Day, the annual London march for Israel hatred.

Sure enough, Dovid Weiss of Neturei Karta is one of the GPU speakers. 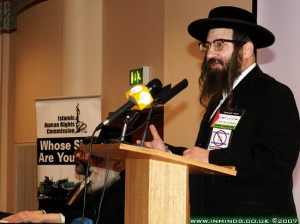 Dovid Weiss at yet another gathering of extremists

This post from last year profiles the group. Its analysis remains spot on.

We shall see who is fooled this year by the grotesque Neturei Karta fig leaf.

This is a cross-post from bananabrain of The Spittoon

“of course we’re not anti-semitic! loads of jews support us! look, here’s one! doesn’t he look jewish? see the black hat! see the big beard! see the sidelocks! these are the *real* jews!” 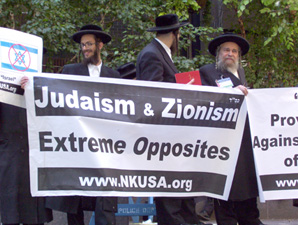 it appears that one of the headline speakers of this year’s al-quds day celebrations (endorsed by the MCB, StWC and organised by the usual rag-bag of islamists and trotskyists) is a regular star of anything where there’s an opportunity to have a go at israel or zionism (particularly islamist fiestas like global peace and unity and the government-boycotted islam expo), the mancunian rabbi ahron [sic] cohen of everyone’s favourite cuddly ultra-orthodox anti-zionists, neturei karta (i’m not going to link to them, frankly)

neturei karta (aramaic for the “guardians of the city”, the city in question of course being al-quds, or as some call it, jerusalem) is an ultra-orthodox sect which is rarely out of the news due to the willingness of its members to cosy up with the most extreme opponents of zionism for some of the most bizarre photocalls you ever will see: 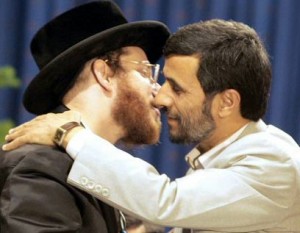 normally, i treat wikipedia as a research resource with extreme caution, but in this case, it looks like a pretty accurate entry. it’s extremely important to know what you’re dealing with, when NK speakers are presented (as they invariably are) as giving “the” (not “a”) “real” jewish view of zionism:

1. there are something like 14 million jews worldwide. in the best case scenario, NK represents something between 5-10,000 people, or 0.07% of the jewish community. in terms of the UK, it would be the equivalent of taking the opinion of a town about the size of bognor regis as representative of the UK of a whole. 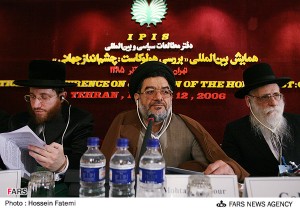 desecrating the memory of the dead

3. even the rest of the ultra-orthodox community (much of which is against a non-theocratic jewish state in any case) dislikes NK and ahron cohen himself has needed police protection from his own community.

4. cohen himself is regularly foisted upon unsuspecting institutions as a balanced viewpoint and was recently un-invited from an oxford college.

these people are, of course, fundamentalist ultra-orthodox. so why do they do it? what possesses them to act like this? it is, of course, a theological answer and the reasoning goes something like this:

1. as jews, we believe the messiah will come one day.
2. when he shows up, he will sort everything out and the jewish people will be saved.
3. as part of this process, the jewish people will return to our ancestral homeland in eretz yisrael and universal peace, justice and brotherhood will prevail.
4. as orthodox jews (of all stripes) believe, this return will involve the building of the Third Temple in jerusalem and the restoration of the davidic monarchy.
5. as ultra-orthodox jews believe, the messianic state will be a theocracy and all jews will become religious (and, obviously, ultra-orthodox).

are we starting to see why these guys might get on with the iranian regime yet?

6. as many ultra-orthodox jews believe, the messianic state will be victorious over attempts to prevent its establishment and anyone who stands in the way of the Divine Will is going to come to a very nasty end indeed.

the major difference between the ultra-orthodox anti-zionists and the ultra-orthodox zionists (such as the hilltop youth faction of the settlement movement) are that the zionists think that the modern state of israel is the return noted in point 3, whereas the anti-zionists think that because the state of israel is not a theocracy, nor has the messiah come, nor have all jews become religious and so on, it isn’t. where these guys end up is:

7. therefore, a jewish state established before the arrival of the messiah is pre-emption of the Divine Will and consequently an offence against G!D.

this is the PoV held by most of the major haredi communities, including the various hasidic sects such as satmar and lubavitch and the mitnagdic sects that run the “yeshiva world”. the sephardim are somewhat more pragmatic. what makes NK so extreme and fringe is that they go beyond point 7 to point 8:

8. therefore, the state of israel is a product of the Evil Inclination (to rebel against G!D) and it’s standing in the way of the messianic return. consequently, to destroy it would be a good thing and anyone who can help in that is consequently doing G!D’s Work.

there are a number of small problems with this, namely the large number of jews in israel that would probably die as the result of the implementation of 8.:

9. oh, well, they’re not really proper jews any more, in fact, NK are the only real jews left because they’re the only ones with the “truth”.

we should also not forget what, in NK’s view, will happen should points 1-9 be carried out:

10. once the Messiah comes, in order to build the Third Temple he’ll need to knock down the mosques on the Temple Mount, but that won’t matter, because G!D will neutralise the muslim menace by some Divine means, presumably a plague or mass conversions, or knocking them all off or something.

one wonders how many of the people listening to rabbi cohen at the al-quds day rally will be apprised of point 10, but it’s certainly worth pointing out.