Another scoop from Ted Jeory, who links to Rahman’s new campaign video, and notices an interesting guest appearance, 44 seconds in:

It is Lutfur Ali, a mate of Lutfur Rahman, who was appointed assistant Chief Executive of Tower Hamlets in circumstances which resulted in more than one raised eyebrow. Lutfur Ali then had to resign, when it turned out that he had been moonlighting. He was discovered to be running a consultancy for private clients while collecting the £125,000 salary as assistant chief executive – a job he obtained with a “misleading” CV. 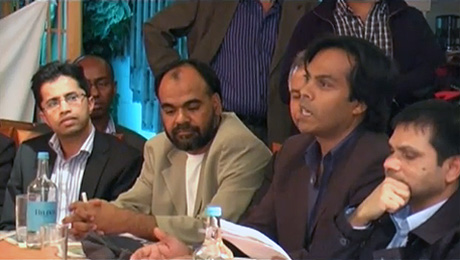 This is why it matters that Lutfur Ali may come back, if Lutfur Rahman wins the election:

Lutfur Ali was appointed assistant chief executive of the council – the second most important post – despite a damning headhunter’s report which described him as “superficial,” “rather limited,” and “one-dimensional.” They said he might “struggle with the intellectual challenges [of] a highly strategic role”.

Unknown to the headhunters, Mr Ali had also been forced to resign from a previous post at the London Fire Authority after breaking rules on political neutrality. He omitted this fact from his Tower Hamlets application.

Luckily, though, he did have what was almost certainly a more important qualification – close links to the IFE. He set up an organisation called the Centre for Muslim Affairs with a number of IFE and IFE-linked figures.

Now it is alleged that Mr Ali has been moonlighting – in council time – for an organisation called the National College for Leadership of Schools. The chief executive, Kevan Collins, confirmed to me that a complaint had been received from the college  – which acted after seeing Mr Ali in my Dispatches programme two weeks ago. A council spokesperson said: “We have received a letter from the National College, and it is being looked into.”

If the allegations are true, it is hard to see how Mr Ali can survive. If he goes, it is bad news for the IFE – and brilliant news for Tower Hamlets.  As well as being apparently unqualified for his job, he is in charge of grants – and under him, quite a lot of grants have been funnelled to IFE-linked organisations.

If Rahman wins, the tap that fed the IFE will be turned back on again.

Sadly, the Lutfur Rahman campaign video has now been removed. I wonder why!

Fortunately, we got a screen grab of the relevant scene and saved the video:

If this is how Lutfur Rahman runs his own campaign, just imagine what a disaster he’d be as Mayor.