RESPECT, and its de facto leader George Galloway, have always made a great fuss about their commitment to anti-racism.  In particular, they have always been at pains to emphasise that the party’s opposition to Israel is not motivated by antisemitism.

It is indeed possible to be opposed to the conduct of Israel, or Israel’s very existence, without – subjectively speaking – being an antisemite. However, given the closeness of RESPECT to the Islamic Forum Europe it is not unfair to be concerned that RESPECT harbours some antisemites. The IFE is aligned with Jamaat-e-Islami, a clerical fascist party in South Asia, and is the clique that runs the East London Mosque and the London Muslim Centre, which have a reputation for hosting very extreme hate preachers.

Here is RESPECT’s Manifesto from this year’s general elections, where they promised to:

Here is George Galloway, shutting down a small Jewish radio station with a libel action, for inventing a comedy character with a catchphrase “Kill The Jews!” that was based on him:

Responding to the judgment Galloway said, “I’m pleased that this judgment has categorically crushed the slur of anti-semitism. I have fought racism, all forms of racism, all my political life. I continue to do so and will also continue to vigorously defend my reputation.

“In Britain there is a party, the BNP, led by a convicted Holocaust-denier, which really is spreading the poison of race hatred. It is focusing on Muslims, the whipping boys of our age, but it is motivated at its core by a white supremacism that regards Jewish people, black people, Roma, disabled people, gay people, and others as inferior, as subhuman.

“All those who are the targets of this bigotry and racism have an interest in banding together to resist it and to stop the BNP exploiting people’s despair.

“In parliament I represent the East End of London. In the 1930s, Jews and communists came together to stop the British Union of Fascists. In the 1970s and 1990s newer arrivals from Bangladesh and the sub-continent joined forces with the labour movement and socialists to stop the National Front and BNP. We in Respect are keeping every aspect of that tradition alive today.”

Ted Jeory has a post up today that shows just how RESPECT keeps the anti-racist tradition alive. 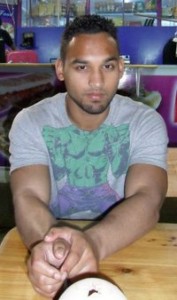 According to his Facebook page, and the RESPECT website, he is a member of RESPECT’s National Council.

Here are some of his views, as displayed on his Facebook page:

Abul ‘Abz’ Hussain just saw trailer on youtube, hmmm dont look too bad mine would be more Italian styled!
Fazarnoor Zaman u mean yahuddi style!
Shah ‘Aziz’ur Rahman Jew!
Abul ‘Abz’ Hussain u know the worlds coming to an end when a jew accuses another of being of his kind!
…
Abul ‘Abz’ Hussain jews like u are boring so find everything lame, here’s a penny go put it in the bank and u just might get a pound after ten years interest!

Shah ‘Aziz’ur Rahman Someones annoyed tonight. Think you need to save the pennies for that big mansion and ferrari in the drive.

…
Abul ‘Abz’ Hussain Not annoyed, u started the jew business!
Shah ‘Aziz’ur Rahman Sorry I meant flat in stamford hill and volvo parked down the street
Fazarnoor Zaman i started it lol! now i’ll end it.. before i chop both of your curly sideburns off and confiscate your kippah loool!

Abul ‘Abz’ Hussain I should have put u on that convoy to Gaza, could have traded the Jew with the Israelis to let the aid through, but then again they’d probably reject u as ur too much of a jew by their standards!

It is very clear that Abul Hussain engages personally in the racist abuse of Jews. He and his friends regard it as an insult to call somebody a Jew. He thinks that Jews are funny because, you know, they’re money grubbing.

This is the language of the BNP, on RESPECT National Council.

Are there any anti-racist members of RESPECT? Will any of them call for Abul Hussain to be expelled from the Party?

It is always fun to browse through the Facebook “likes” of idiots.

Abul “Abz” Hussain’s “likes” include “Easy Talk“, a radio show presented by Azad Ali, an IFE activist who believes that “nobody” agrees with democracy if it means “not implementing the Sharia”. Azad Ali recently lost a libel action in which he objected to a newspaper pointing out his support for attacks on British troops. He threatened Andrew Gilligan’s researcher, live on his radio show, earlier this year.

I’m told that he was a Tory student activist when at the LSE.