It was on 9/11, the 11th of September, that the Hungarian neo-Nazi party Jobbik chose to celebrate its “Day of Hungarian-Arab Friendship”. 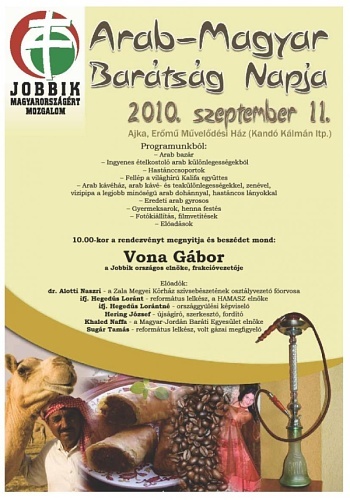 There were proclamations by Gábor Vona, Jobbik’s leader, and by Lóránt Hegedüs jun., a pastor of the Reformed Church of Hungary and president of “Hamasz” (the official acronym of Hazafias Magyarok Szövetsége, the “Association of Patriotic Hungarians”). During the celebration of Hungarian-Arab Friendship in Ajka both said they are sure Israel is buying up Hungary.

“What is the Western world under leadership of America doing in Afghanistan?” Vona asked rhetorically. According to him 9/11 was just an excuse for the USA to occupy Afghanistan, as the actual facts of the day are not really known. Even if the official explanation should be true (which he doubts), “9/11 was just an act of revenge by some Arab terrorists because America had been making life in Arab countries miserable and, by supporting Israel, hindered the creation of the State of Palestine.”

Vona, who spoke of his good fortune to have visited Arab countries, said that he can confirm from first-hand experience that Arabs are good people who do not constantly commit suicide attacks, at least in their own countries. He believes they have no chance to defend their rights, and fell victim of a battle for raw material. “Let’s thank Lóránt Hegedüs jun. that the local Arabs now have the opportunity to express their opinion in a Reformed church, because they are not allowed to do so elsewhere.”

According to Vona, Jobbik is fighting against the Israeli occupation of Hungary. His proof: a quote by Shimon Peres, the president of Israel, who stated publicly, at an economic conference, that Israeli realtors are buying up Hungary. As the statement was never denied, he considers it to be an official declaration of intent.

According to Vona “The days of Israel in the middle of an Arab sea are numbered” and the failure in Afghanistan proves how strong and forceful Islamic countries are. Therefore the Israelis are looking around for a new homeland, and have decided on Hungary, where the soil, food and water are good, and the inhabitants have been mistreated so much and for so long that they might not notice that their land is being occupied.

Jobbik MP wants concentration camps in Hungary
The “völkisch” (nationalistic) Fidesz-KDNP party, which heads the Hungarian government, wants to be considered abroad as a normal conservative party. However in the Fidesz-aligned daily “Magyar Hirlap”, Jobbik’s MP Gábor Staudt proposed concentrating criminal Gypsies and their families in “settlements for the defense of the public good”, a euphemism for concentration camps. Prison inmates would have to work on buildings, the homeless on public works. And Staudt, Jobbik’s official candidate for mayor of Budapest, would intern socialists (MSZP-members) as well.

Staudt said he doesn’t understand why Fidesz does not support Jobbik’s idea to create “settlements for the defense of the public good”. After all Fidesz proposed in parliament a law – supported by Jobbik – to sanction petty crime with confinement.

“Crime has no skin-color, and perpetrators must be held accountable to an objective standard. But this doesn’t mean that Gypsy crime should not be dealt with.”

However coded the words may be, there’s no doubt that Jobbik wants to set up concentration camps in Hungary for all those it does not like: Jews, Gypsies, socialists, homosexuals and others. It is high time for the EU, which is so quick to condemn France for expelling Gypsies, not to close its eyes to what happens in the middle of Europe.

On September 20 she wrote:

Huge political controversies can erupt in Hungary, even on Sundays. Here is the latest. Yesterday morning Árpád Szakács, a lawyer and history buff, gave a press conference in front of the Budapest Public Library named after its founder and chief librarian, Ervin Szabó (1877-1918). He demanded the removal of Szabó’s name because he was a communist.

First, some background. On September 16 MTI (Hungarian News Agency) reported that a group of historians established a foundation “to correct and neutralize the negative influence of Marxist historical writing that is still perceptible” in Hungary. The new organization is called the Foundation for National Conservative Historical Research and is headed by Gábor Vincze, editor-in-chief of a publication called Nagy Magyarország (Great Hungary). As the people close to the publication explained, the name cannot cause any confusion concerning possible revisionist tendencies because the title is not Nagymagyarország or Nagy-Magyarország, which would designate Greater Hungary. No, they simply want to make it clear that their research extends to all regions of the Carpathian Basin. I might add here that this has been always the case in Hungarian historiography and the distinction seems forced to me
…..
What I find astonishing is that reactions to Szakács’s demands pro and con talk about everything, including the nature of Ervin Szabó’s political views, except what is really important: the far right is working on rewriting Hungarian history. They are trying to eradicate all traces of the Hungarian social democratic tradition of which Ervin Szabó was a part.

The Jobbik attack on Hungarian history began with an assault on Mihály Károlyi, the prime minister, later president of Hungary in 1918-1919. They demanded the removal of his statue that stands close to Parliament because, according to them, Károlyi was a traitor who was responsible for the Treaty of Trianon and who handed over power to the communists. I’m not planning to go into the details of this very confusing period, but believe me that Károlyi didn’t do anything of the sort. He happened to be a decent man who thought that because of his well-known pro-Entente stance the Great Powers would be kinder to Hungary. As we know, that was not the case. The accusation that he handed over power to the communists is also baseless.

One could easily ignore Jobbik’s demands if they didn’t receive support from important Fidesz politicians. In the case of the Károlyi controversy it was László Kövér, the speaker of the house, who came to the rescue. Yes, he said, Károlyi’s statue must go. He even had a suggestion about who should receive a statue in its place: Anna Kéthly, one of the leaders of the Hungarian Social Democratic Party who ended her life in exile after the 1956 Revolution.

There is no question that Ervin Szabó was a socialist who translated the works of Marx and Engels into Hungarian with his own introductions. It is also true that in his later years he was attracted to revolutionary syndicalism, but it seems to me that Jobbik’s real problem with Szabó is his total rejection of any kind of nationalism. If we had all read Magyar Hírlap religiously we could have predicted that Ervin Szabó would soon be a target. Gábor Szabó, one of the founders of Jobbik and the Hungarian Guard, wrote an article in Magyar Hírlap (September 17, 2010) about Ervin Szabó entitled “An anti-Hungarian ‘revolutionary.'”(In fact, in the original it was “népforradalmár” [people’s revolutionary], a word that doesn’t exist and makes no sense.) In it, he accused Ervin Szabó of being the initiator of the Hungarian socialist movement’s antagonism toward natonalism which is of course nonsense. After all, social democracy was a movement based on internationalism.

In any case, in those days being a social democrat or a syndicalist or a translator of Marx and Engels was tolerated by the authorities. Ervin Szabó published widely in Népszava, the official organ of the Hungarian Social Democratic party, he became founder and chief librarian of the Municipal Library and was also accepted in Hungarian liberal circles. But this world is totally alien to Jobbik’s leaders. Even historical figures who don’t share their worldview must be banished. Their statues must be removed, streets or institutions named after them must be renamed: they were communists, traitors, “nemzetietlen,” or whatever. They held opinions different from what Jobbik considers to be acceptable. And that’s enough.

Géza Szőcs, born and educated in Romania, decided to support Jobbik in its quest to marginalize Ervin Szabó, the man who introduced the public library system to Hungary. Szőcs is a poet and writer who was picked by Viktor Orbán himself to head what used to be the ministry of culture. A few months ago Szőcs got all mixed up between linguistics and DNA; echoing Jobbik’s infatuation with Kazakhstan, he promised money and government support to find the real relatives of the Hungarians in that region. He now wholeheartedly supports Jobbik’s demand to remove Ervin Szabó’s name from the Municipal Library network in Budapest. After all, he knows so much about syndicalism. Just as much as he knows about the origins of Hungarians.

And now we come to the crux of the matter. We don’t know where Jobbik ends and Fidesz begins. The Hungarian right is composed of shades of radicalism that has nothing to do with conservatism even if Jobbik’s historians call themselves “nationalist” and “conservative.” The editors of Nagy Magyarország proudly claim that well-known, mainstream historians, economists, and academics have published in their quarterly. And indeed, Géza Szőcs himself appeared in the very first issue which was devoted to Trianon. We find in subsequent issues the names of the late Jenő Gergely, ELTE professor of history, Ernő Raffay, historian and undersecretary in the Antall government, Sándor Szakály, military historian, László Bogár, economist, member of the first Orbán government, and one could go on.

With thousands of threads these people are connected to one another and thus it will be practically impossible to get rid of Jobbik. Or, rather, one can destroy it as a party, and Viktor Orbán is very skillful at such maneuvers, but the spirit will live on in any party that claims to belong to the right.

The neo-Nazi website “hunhir” commented on the initiative to change the name of Budapest city library: “It does not behoove one of the most important national institutions of the land to flaunt the name of an ultra-leftist Judeo-Bolshevik ideologue, a trailblazer of the Jewish Rat-republic.”

Jobbik is a Nazi party. 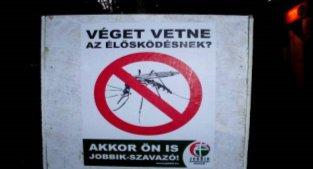 Jobbik poster: “Do you want to put an end to parasitism? Then you are a Jobbik voter.” 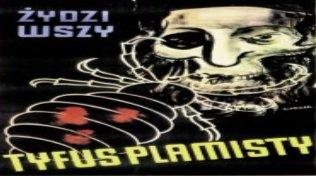