Stephen Colbert, a liberal who pretends to be a rightwinger on his TV show “The Colbert Report,” testified (mostly in-character) before a Congressional committee on behalf of the United Farm Workers union. Colbert recently accepted an invitation from the union to spend a day working as a farm laborer.

The UFW supports a bill in Congress that would give undocumented farm workers in the United States the right to earn legal status.

“My great-grandfather did not travel across four thousand miles of the Atlantic Ocean to see this nation overrun by immigrants. He did it because he killed a man back in Ireland. That’s the rumor.”

“Maybe we could offer more visas to the immigrants who, let’s face it, would probably be doing these jobs anyway. And this improved legal status might allow immigrants recourse if they’re abused. And it just stands to reason to me that if your co-workers can’t be exploited, then you’re less likely to be exploited yourself. And that may improve pay and working conditions on these farms. And eventually Americans may consider taking these jobs again.” 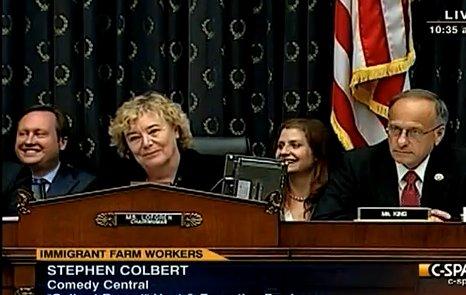 Regardless of what you think of Colbert’s shtick (and I think it’s very funny), he seems to be a basically decent guy who last year spent a week in Iraq entertaining American troops and getting a buzz cut for laughs.