In fact, as devoted Harry’s Place readers know, the phrase does appear in Thomas Jefferson’s letter to the Danbury Baptists. The passage reads, “I contemplate with sovereign reverence that act of the whole American people which declared that their legislature should ‘make no law respecting an establishment of religion, or prohibiting the free exercise thereof,’ thus building a wall of separation between Church & State.”

In related news, Jon Stewart of “The Daily Show” has announced a “Rally to Restore Sanity” for October 30 on the Washington Mall. Here he displays one of the signs that will be available to participants: 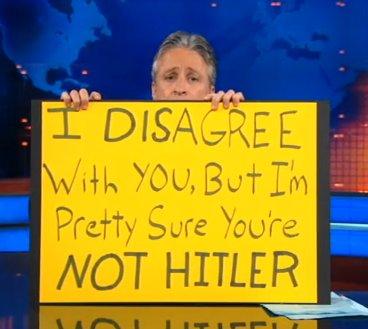