Some terribly sad news. Yvonne Ridley has become a Troofer.

The Tehran Times has the scoop:

“I hate conspiracy theories, but I do believe that the (George W.) Bush administration knew far more about 9/11 in advance of it happening,” Ridley said on the day when the United States commemorated the ninth anniversary of the September 11, 2001 attacks, in which nearly 3,000 people died. 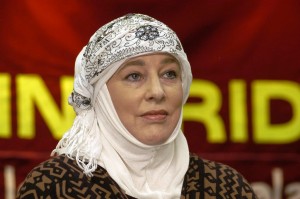 Sad to see a great intellect so unsaddled.

Gene adds: There is in fact a history here.

Update: Here is Yvonne Ridley at the Khomeinist Al Quds Day march in London earlier this month. “Victory to Hezbollah! Victory to Hamas!”