As the US pastor Terry Jones says he is not “backing down” from plans to burn copies of the Koran on today the anniversary of 9/11 the BBC on its Ten O’clock News last night told us exactly what it thinks of the preacher from Florida. Its on screen graphics had him credited as Mohamed Rifaah from Al Azhar University.  So not Jones speaking at all, but Mohamed. 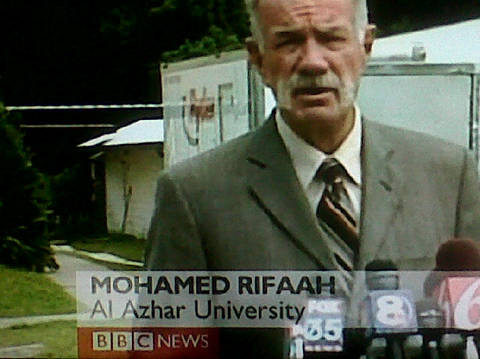 Okay it was probably a mistake. Rifaah was the next talking head, but then again….

Elsewhere, Gainesville the town in question has made it clear it rejects Pastor Terry Jones while the Council on American-Islamic Relations plans to hold a news conference in Washington today to address the issue. It also plans to distribute of 200,000 korans as part of its “Learn, Don’t Burn” initiative.

Given that CAIR was an unindicted co-conspirator in the Holy Land Foundation terrorism financing trial, and is transparently a front organisation for Hamas/Muslim Brotherhood, its conduct could not be more ill judged.

What has made this battle particularly difficult, is that there are a number of very vocal Muslim advocacy organisations in the United States which are connected to, and defend, the Muslim Brotherhood. On the other side are the likes of Pamela Geller and Terry “Not Python But Might As Well Be” Jones, who take the view that Islam itself is a conspiracy against America, and that all Muslims are either participants or dupes in that conspiracy. CAIR and Jones are effectively the twins of each other. I wouldn’t be surprised if they have distributed Qurans in the expectation that some of them will be burned in public by nutters, so as to ratchet up the outrage, hatred and mistrust on which extremists thrive.

That is why it is essential, now more than ever, to make it clear that we recognise that Hamas/Muslim Brotherhood front groups like CAIR do not have a monopoly on Islam,  that we oppose them, and that we stand firmly with our Muslim friends and neighbours who are being subjected to a general vilification by bigots and extremists.