The National Secretary of the Socialist Workers Party, Martin Smith, has been convicted of assaulting a police officer. Smith is also an “officer” of Unite Against Fascism, and National Coordinator of Love Music Hate Racism. 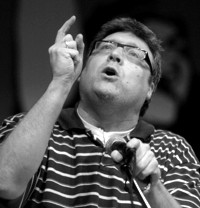 In that later capacity, the LMHR website’s lead story is that one of the members of Babyshambles (not Pete Docherty) is ‘disgusted’ by the verdict against his ‘hero’.

Martin Smith isn’t much of a hero, or indeed an anti-racist. Under his tenure at the Socialist Workers Party, the antisemitic crank Gilad Atzmon spoke and played repeatedly at Socialist Workers Party events. When it was pointed out that he had written articles which claimed that the Protocols of the Elders of Zion accurately described the reality of Jewish Power, he was boldly defended by the party hierarchy, who denied that he was a racist. The defence of Atzmon continued, although friends of the SWP such as Michael Rosen had patiently explained that Atzmon was an open Jew hater, and wiser political operators such as George Galloway had decided to give him a wide berth. Martin Smith didn’t care. He appeared at events alongside Gilad Atzmon, including this SWP fundraiser.

But did he really assault a police officer? Well, that is what the court found. Smith refuses to accept his guilt: but then denial is a common response from criminals, when faced with punishment.

Andy Newman and Mark Serwotka cannot believe that Smith could possibly have committed the acts upon which his conviction was based. Five trade unions are apparently “backing” him. Perhaps he will be lucky on appeal. People sometimes are.

I imagine that a member of the CPGB who claims that Martin Smith assaulted him will take a different view.

And I’d guess that Linsdey German is laughing.

Here is some footage from the events of that day:

Another clip is available here.