This is a cross post from Alexander Meleagrou-Hitchens at Standpoint

For the past week I have been in New York, and on Tuesday took the afternoon to visit Ground Zero and Park51, the site of the Cordoba Initiative’s proposed Islamic centre. 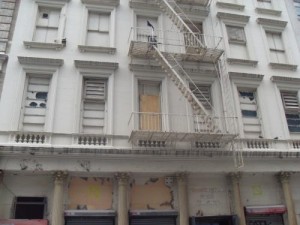 As I pressed the timer on my watch in order to check how long it takes to walk from the former World Trade Centre to the Cordoba site, it dawned on me how absurd this whole issue really is; what distance would be appropriate? Should there be some sort of strictly enforced ‘don’t offend me’ radius around Ground Zero?  The next day, the New York Times reported that Mayor Bloomberg made exactly this point:

Mr. Bloomberg…said he understood the impulse to find a different location, in the hope of ending the controversy.

“But it won’t,” the mayor said, “The question will then become, ‘how big should the ‘no-mosque zone’ around the World Trade Center be?'”

Arriving at the site (it’s about a three minute walk in case you were wondering), I saw three young New Yorkers holding up signs in support of the mosque.  Wishing to get at least some idea of the nature of pro-Park51 New Yorkers, I discussed the issue with all of them and was pleasantly surprised:  they were normal, young liberals like me, able to balance an appreciation of the threat of Islamic jihad with an understanding that not all Muslims want to take over the world.  It was difficult, however, to keep up a long discussion, as we were regularly interrupted by passers-by, many of them clearly against the plans.  Two things struck me about these people: first, the main crux of their argument was that it is offensive to have a mosque built so close to Ground Zero; and second, although they were clearly against the centre, they were unwilling to support any sort of ban on its construction.

On the first point, this is simply not a valid argument, and one that was made recently by a Democrat, Sheldon Silver, who is also the Speaker of the New York State Assembly.  In City Hall this week, he said that Cordoba “should take into very serious consideration the kind of turmoil that’s been created and look to compromise.”  Instead, he hoped that they could find “a suitable place that doesn’t create the kind of controversy” brought about by the Park51 plan.

In any discussion about the construction of the Islamic centre, the least relevant point is that it is in some way an offensive act.  Comparisons with the Mohammed cartoons episode have already been made in this debate, but it is worth repeating that, in order for the ‘right to offend’ argument to hold any sway, it must be allowed to go both ways.

There are, however, a number of concerns that if they had any foundation, would be relevant.  Some of these include:

There is no question that the centre must be allowed to go ahead, and unless they are receiving Iranian government money, or plan to use the site to promote jihadist preachers, there is absolutely no legislation which could be used to stop it.  However, for those of you hoping that the inevitable construction of the centre will prove once and for all that America is not at war with Islam and Muslims, I fear you will all be sorely disappointed.  People who continue to peddle this idea, particularly Islamists, have no interest in conceding that they are wrong – in fact, they need it to be true.  Take, for example, the reaction of some of the senior members of Egypt’s Al-Azhar University, who are convinced that far from being a symbol of Islamic supremacy, the project is an attempt to link 9/11 with Islam, thus assisting in the ancient and ongoing Zionist-Western plot to destroy Islam.

The majority of people who claim that there exists such a conspiracy do so on the basis of irrational ideas (see above), and using logical arguments will simply never convince them, and no one should waste their time trying to do so.

A friend of mine, accepting my argument that this will not shake people out of their absolute conviction that America wants to eradicate them, told me that instead he holds out the hope that allowing the mosque will convince potential future recruits to Islamism that America does not hate them.  This may be true, but it is also almost impossible to measure.  Also, considering the myriad of anti-American conspiracy theories that (thanks to Islamists, and many others) are now accepted as gospel-like truths among many within the pool of potential Islamists, we will need far more than the building of an Islamic centre in Manhattan to effect any real change in attitudes.

Park51 is not a conspiracy to promote extremist Islam, and nor is it an effort to destroy the entire religion, rather it is a (poorly judged) attempt to heal some very raw wounds in New York, and one that probably will not succeed in its mission.  There are far more important debates to be had about extremism, Islam and terrorism, and a year from now the most striking thing about this entire episode will be just how little difference it made to anything.