Sometimes it’s useful to sit back and examine your own preconceptions about figures in the public eye. For many people who read this site it is axiomatic that the Viva Palestina convoys are a merely cheap way of keeping ex-MP George Galloway’s public profile high for the price of a few tonnes of out of date medicines nobody has any use for.

But what if there’s more to it than that? Here’s the take of the comrades of the Workers International Vanguard League:

The ‘convoy’ aims to prop up the legitimacy of the anti-worker Egyptian regime, to prop up imperialism and to demobilise the world proletariat

Every tablet or bag of flour is handed over either under the control of the Egyptian regime or of the fascist Israeli regime; in other words world imperialism still controls the fate of the Palestinians; in the last Galloway convoy it travelled under the direct support of the regional governor of Egypt in Sinai, who even offered to cover some (or all) of the convoy costs.

The Galloway convoy is a veritable Trojan horse, giving legitimacy and saving the face of the Egyptian regime, and at the very time that imperialism is launching major attacks on the British working class, they are reduced to acts of charity, rather than a general strike against the UK imperialist regime.

By lulling the world working class into passivist actions, the Galloway convoy is really about sustaining the imperialist siege against the Palestinians.

Remember these words next time some right-on dude tries to pull the wool over your eyes and pretend Gorgeous George is on the side of the downtrodden and oppressed.

Down with paid for Egyptian flunkey Galloway! 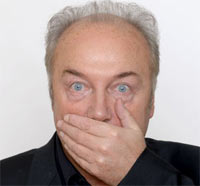