A YouGov poll of Labour Party members, affiliated trade union members and MPs confirms David Miliband not only as the frontrunner, but puts him on course to win the first and crucially the second ballot in a run off with his brother Ed Miliband.

Ed Balls comes in what will be for him, but not too many others, a hugely disappointing last in the poll while Andy Burnham comes second and Diane Abbott third.

The poll appears to dispel doubt that David Miliband could struggle in the second ballot and also gives an indication that trade union affiliated members will not be following the recommendations of their union leaders  — Unite, Unison  and the GMB have all backed Miliband junior. 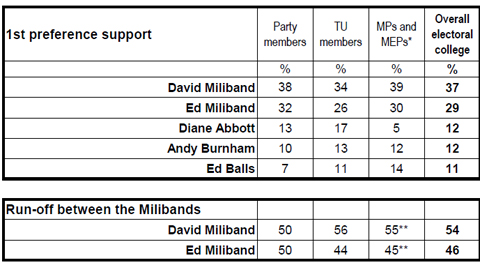 However, maybe the most crucial piece of information that this poll delivers is what supporters of David Miliband have known since the start. Asked who is most likely to lead Labour to victory at the next General Election those surveyed put David Miliband far ahead on 52 compared to Ed Miliband on 24.

Asked who would be most effective as leader of the opposition and at holding the present government to account he is far ahead again on 40 compared to his brother on 24.  This appears to confirm the increasingly widespread feeling that Ed Miliband while pushed as a challenger is not seen as a future prime minister while David Miliband is. 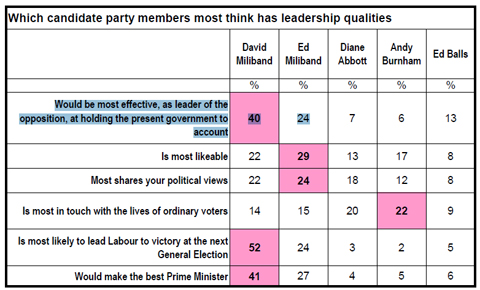